This right here is why most criminals leave their dogs at home when they go out on burglaries. 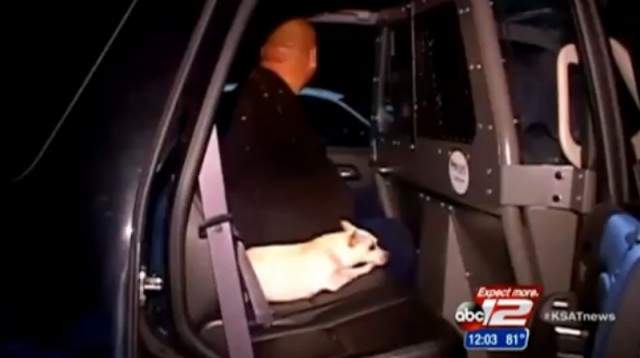 Ever wondered why you hear a lot of talk about “cat burglars,” but never so much as a peep about “dog burglars”? Well, it’s because dogs make terrible burglars, as a San Antonio man learned when he brought his chihuahua along on a break-in earlier this week. After making a daring escape and hiding in the bushes, the growling of the dog gave away Gerardo Daniel Reyna’s position to police, leading to his arrest. This is why, traditionally, dogs stay on the “security” end of crime. It plays to their strengths.

Responsibility for the bungled crime can’t all be laid at the paws of Reyna’s canine co-conspirator, though. Considering the 42-year-old’s target was a jukebox at a taco joint containing a grand total of $104 — or, in jukebox currency, 416 plays of “Don’t Stop Believin'” — it’s clear that Reyna wasn’t exactly a criminal mastermind. His “one last job” foiled, Reyna — who was also caught, along with his dog, on the restaurant’s video surveillance system —  will likely be cooling his heels in jail for the foreseeable future.

Less clear is what will happen to the dog who, considering how well-planned the rest of this caper was, may actually qualify as the brains behind the operation.