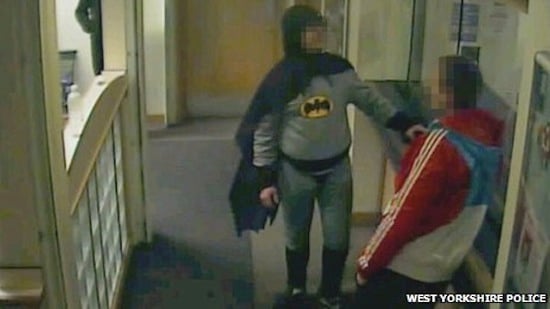 Police officers in Bradford, England last week got a gift that will be familiar to comic book readers everywhere when a ne’er-do-well was dropped off to be booked at the police station by none other than Batman himself. Early on the morning of February 25, the Caped Crusader — who looks to have let himself go a little bit of late — escorted a 27-year-old man into the Bradford police station. The 27-year-old was arrested on charges of fraud and handling stolen goods. Batman, as is his wont, disappeared into the night.

At the moment, it’s unclear who the man behind the mask was, or why he eschewed the traditional Batman criminal drop-off service, which would have seen the suspect left hanging from a convenient light post. Just how he apprehended the suspect, who is scheduled to be arraigned this Friday, is also an open question.

Police have finally released security camera footage of the incident this morning, though, offering the public their first look at the DIY Dark Knight who is now dispensing justice in West Yorkshire.

Police at the station told the BBC that:

“The person who brought the man in was dressed in a full Batman outfit. His identity remains unknown.”

His identity isn’t what matters, though. After all, whatever person he might pretend to be during the day is just a disguise. We know who that masked man really was.