U.K. to Commemorate Doctor Who 50th Anniversary With Stamps 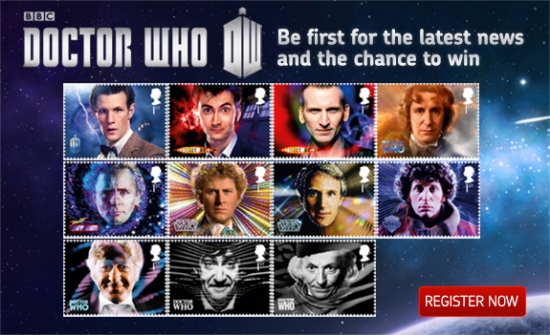 Sometimes I forget that stamps are still a thing, because we live in the future now, but then something tremendous happens in regards to stamps that reminds me of their existence. The United Kingdom’s Royal Mail service is commemorating the 50th Anniversary of Doctor Who with a series of stamps featuring all 11 doctors. There’s even a miniature sheet featuring the TARDIS, Daleks, the Ood, Cybermen and Weeping Angels. Sadly they’ll only be available in the U.K., and I imagine they’ll sell out quickly. Perhaps even sadder, there’s no K-9 stamp. Poor little guy can’t get any love.

Of all my geeky hobbies as a kid, stamp collecting, or philately, never appealed to me, but that’s probably only because it’s very boring. Although I do still get excited when something I like gets released in stamp form, and I’m really excited for these Doctor Who stamps. All eleven Doctors are featured on First Class stamps, as is the TARDIS. The stamps of the Ood, Daleks, Weeping Angels, and Cybermen are relegated to Second Class status. I understand trying to knock the villains down a peg, but it seems unfair that the Ood get lumped into the Second Class category. Haven’t the Ood been through enough already?

The stamps will be available in the U.K. in the Spring of 2013, and interested parties can register with the Royal Mail on their website to get notifications about when they can be ordered. Users who register are entered into a drawing for one of five sets of the stamps being raffled off on January 3rd, 2013.

There’s no definitive word on the Royal Mail’s site about the stamps only being sold to U.K. residents, but I just attempted to buy a different set of stamps through their website, and was unable to register without a U.K. postal code. If you live elsewhere and wants these, stamps you might have to enlist some foreign aid.

I do have a few friends in the U.K., and I would be eternally grateful if one of them sent me a letter with one of these stamps. I’d even be happy with the Paul McGann one, and he barely even counts.

(via The Royal Mail)