Topps Creating Doctor Who Trading Card Game, but Not the First 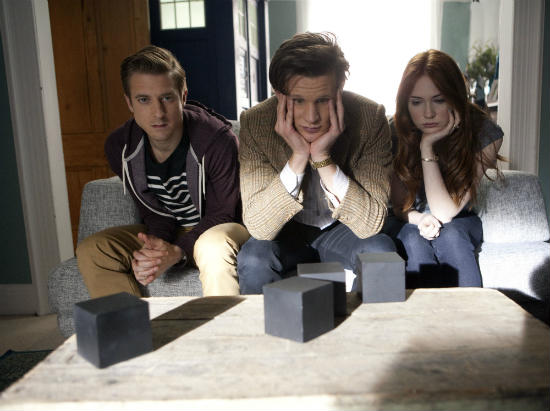 We’ve had a video and board games in the past, but now, thanks to Topps Europe, we’ll be getting a Doctor Who trading card game sometime next year. We can only hope the game will take common phrases from other popular TCGs, but combine them with Doctor Who terminology, after all, it seems like it would be fun to remember not to tap the Sonic Screwdriver in order to prevent space-and-time burn.

Topps has partnered with BBC Worldwide for the TCG, which will include characters and images dating as far back as the beginning of the 2005 reboot, and will also include things from the most current season. Topps Europe entertainment marketing manager Louise Ramplin notes that Topps’ Doctor Who line of stickers has been a successful product line for the company, so they hope the TCG will bolster the series’ product line’s popularity. No word yet if all three Doctors will make an appearance.

While TCGs seem to be a lost art nowadays, with Magic: The Gathering fading in and out of the spotlight every so often, this isn’t actually the first Doctor Who TCG to hit the market. There’s actually a load of Doctor Who games floating around in the world, as the show has been around since 1963. A quick search on BoardGameGeek returns a plethora of Doctor Who board and card games, with a straight-up TCG from 1996 making an appearance.

Though the 1996 TCG exists, it’ll be nice to get an update with characters, items, and scenery from the current series that we’ve all grown to love and hate. Details on the new TCG are currently light, but the 1996 TCG operated with a kind of half casual, half deep rule set. Players would operate in three different time zones — past, present, and future — and play a card in a specific zone, with the goal of overwhelming their opponent in a zone. Cards had three stats, so it wasn’t simply a game of “taking up space with cards,” but it didn’t come with an enormous book of complicated rules.

It’ll be interesting to see where the new Topps TCG goes, as the TCG market has been flying under the radar for quite a while now. Maybe a prominent license like Doctor Who can make a splash.