TARDIS Model Uses Augmented Reality, Is Bigger On The Inside | The Mary Sue 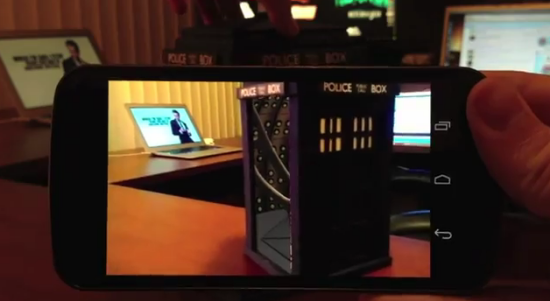 Any Doctor Who fan can tell you that the TARDIS is “bigger on the inside,” but reproducing the dimensionally transcendental interior of the Doctor’s little blue box in a model or toy is a bit impossible at the moment — except with augmented reality. Greg Kumparak used augmented reality to create this TARDIS model that appears bigger on the inside, at least when you look at it through Kumparak’s smartphone.

Augmented reality is neat stuff for sure. Apps like Layar let you browse the world around you like a Terminator on the hunt for the nearest five-star pizza place. Layar even lets you play 3D Pong with people all over the world. 3D Pong and searching for pizza are both noble tasks, no doubt, but Kumparak wins my vote for best use of augmented reality so far.

The TARDIS model was built from scratch, and not just the physical object itself. Everything about the model, from the box, to the 3D model of the TARDIS interior, even the code to bring it all together was done by Kumparak all because, as he puts it in the video, he had a few hours to kill.

Impressive model-building aside, Kumparak basically taught himself the 3D modeling program Blender so he could make the interior model. I’ve used Blender, and I can say first hand that it is not a simple program. Kumparak also wrote the app for his phone to combine his TARDIS model and his 3D interior design using Unity and Qualcomm’s Vuforia API.

This is every step a do-it-yourself project. It’s not impossible to do what Kumparak did, but unless you already know, or are willing to learn model building, programming, and 3D modeling this project might be a little out of reach. Good news though, he does plan on making a papercraft version available so everyone can get in on the fun.

Check out this video of Kumparak showing off the finished model: