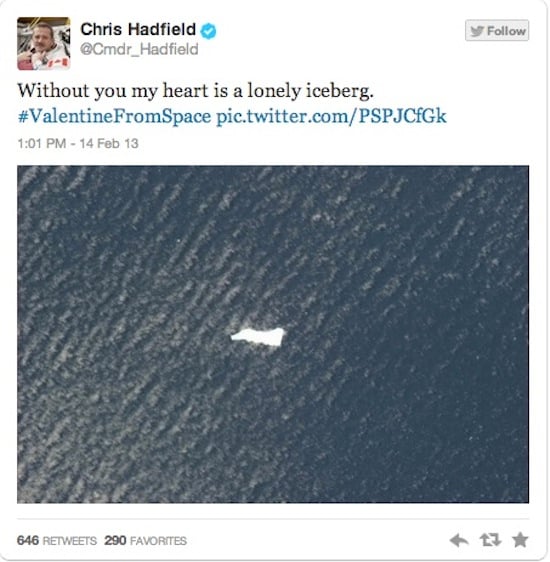 People, can we acknowledge for a moment that Canadian astronaut and ISS Commander Chris Hadfield is absolutely blowing up right now? In the last couple of weeks, dude has hosted a Google Hangout explaining life on the ISS, chatted with Captain Kirk, and recorded the first song from space. This morning, though, found Hadfield getting all poetical, tweeting a Valentine photo of a free-floating iceberg taken from the ISS with the message “Without you my heart is a lonely iceberg.” (And since we’re all wondering it, sorry, folks, he’s spoken for.)People are of course eating it up, because it’s totally sweet and from space and… shut up you guys, there’s something in my eye!

Since Valentine’s Day is all about sharing the love, Hadfield wants to hear your space-themed Valentines all day. He’ll even be retweeting the best — or cheesiest — ones, which is pretty great, but also makes us suspect that running the ISS might be a little easier than we’ve been led to believe. There seems to be a lot of free time for hanging out on the Internet involved, at least. Get @Cmdr_Hadfield with your best #ValentineFromSpace today, and when it gets retweeted, you can tell your special guy or lady it was all about them — even if you were getting a little swoony over Hadfield when you sent it, because who doesn’t love a man in a space suit? We’re not made of stone!

You can see some of our favorite #ValentineFromSpace below, and we’ll be updating all day long.  Be sure to check back regularly so you’ll have something nice to say to your Valentine tonight, even if you did steal it from the Internet.

Without you my heart is a lonely iceberg. #ValentineFromSpace twitter.com/Cmdr_Hadfield/…

@cmdr_hadfield Betelgeuse is red. Rigel is blue. Neither of these stars shine as bright as you. #valentinefromspace — Dale Foote (@MT_DaleFoote) February 14, 2013

You are the thrusters that keep me in orbit when the world tries to bring me down.#valentinefromspace @cmdr_hadfield