What is Bilbo Baggins’ Hobbit Hole Worth in Today’s Market? 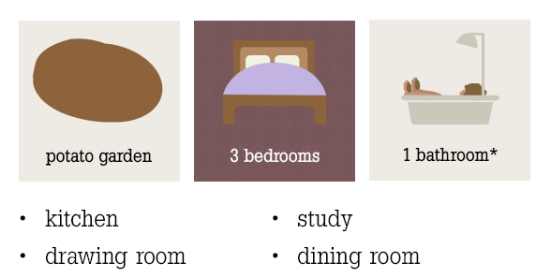 There are a lot of different kinds of geeks in the world. You can be a literature geek, a video game geek, a comic book geek, or really geek out about just about anything. We won’t judge you. The folks over at Movoto.com geek out about real estate, but lucky for the Internet, they also geek out about The Hobbit. They’ve combined their interests to create a real estate valuation and listing for Bilbo Baggins’ home, Bag End. They even put it together in tasty infographic form.

The opening lines of The Hobbit mention that Bilbo Baggins lives in a hole in the ground. That might not sound appealing to a lot of people, but we’re betting that fans of The Hobbit would trade their mithril armor for a chance to live in a hobbit hole.

Bag End isn’t just any hole in the ground, it’s a 4,500 square foot, three bedroom hole in the ground with its own potato garden. How do you value something that doesn’t really exist? Movoto looked at factors like the location, size, and amenities of Bag End. To do this, they drew heavily from Karen Wynn Fonstad’s The Atlas of Middle-Earth which contained a map of the home.

Buyer beware, the map did not include a bathroom, but Movoto assumed there would be at least a small hobbit-sized one somewhere on the grounds.

Other major factors in home valuation are location and how the home stacks up to comparable homes in that area. Although Bag End is in a prime location at the end of Bagshot Row in Hobbiton it faces the problem that Hobbiton and The Shire are not real places. Again Movoto had to take some liberties.

They decided to place The Shire not in New Zealand where the film was shot, but rather in England where Tolkien was from. They used his favorite county of Worcestershire because they felt that’s where Tolkien would have wanted it.

Since they couldn’t very well compare Bag End to other hobbit holes, they had to use similarly sized homes to compare, and got an average valuation of $296 per square foot. They used this number to put a $1,330,000 price tag on Bag End.

Seems steep, but it’s nothing compared to the price they put on Wayne Manor.