Gandalf on a Unicycle Playing Bagpipes [Video] | The Mary Sue 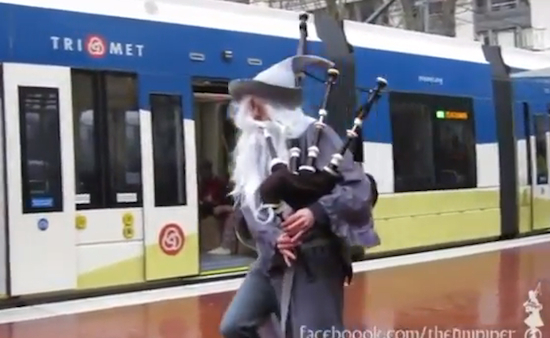 Fans of The Lord of the Rings each have their own special way of celebrating the countdown to yet another film installment of their favorite franchise. Some opt to dress like hobbits and refuse to shave their feet until opening night, and others devote themselves to speaking nothing but Elvish for any and all social interactions. Portland’s hometown hero the Unipiper, on the other hand, takes it one step further by combining his famous schtick — playing the bagpipes whilst riding a unicycle — with his reverence for Gandalf the Grey. What we ultimately get is too much nerdiness for one video to possibly contain!

The Unipiper has actually been nominated as a  potential candidate for “The Hobbit: An Unexpected Journey Fan of the Week.” So if Gandalf’s managed to unicycle his way into your heart, do the man a favor and vote for him on the contest’s official Facebook page. It doesn’t take long at all and we promise you won’t miss that all-important second breakfast. On a totally unrelated note, why’s that guy in the pink running after Gandalf toward the end of the video? Last time we checked, pink jackets aren’t exactly standard issue for goblins. They’re partial to earth tones, actually.