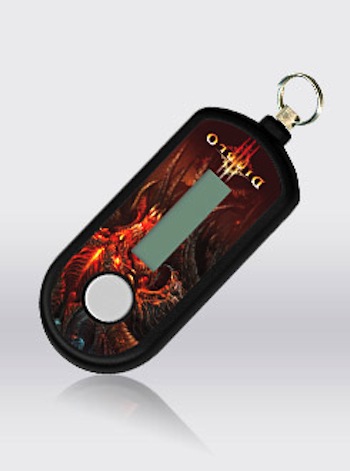 In the wake of a series of invasive hacks earlier this year, Battle.Net users are taking their anger and frustration out on Blizzard with a new class action lawsuit. While lawsuits are par for the course when it comes to potentially leaking users’ credit card information, it seems that WoW and Diablo III fans are enraged over a different aspect of the scandal. Rather than focusing on the allegedly lackluster security of Battle.Net, users are suing over the fact that Blizzard tried to take advantage of the event by strongly recommending that insecure users buy the Battle.Net authenticator, a little keychain dongle that generates random passwords for players’ accounts.

According to lawsuit, monetizing the security of a user’s account incentivized Blizzard to avoid maintaining a high standard of security for the site on their own, essentially creating a hidden security fee for players to protect themselves. Blizzard currently sells authenticators on their online store for $6.50. There is also an authenticator smartphone app available on most smartphone ecosystems, which provides the service free of charge. According to GamesIndustry International, Blizzard has made approximately $26 million dollars selling authenticators.

The lawsuit specifically points to two security breaches in 2012; an incident in May where Blizzard announced that players’ personal information had likely been stolen, and a hack in August that stolen users’ email addresses and security questions. In addition to damages and banning the sale of the authenticator, lead plaintiff Benjamin Bell is asking requesting that Blizzard allows players to play the developers’ non-MMORPG games without a Battle.Net account.