Death Knight’s Plague Rips The World of Warcraft to Shreds 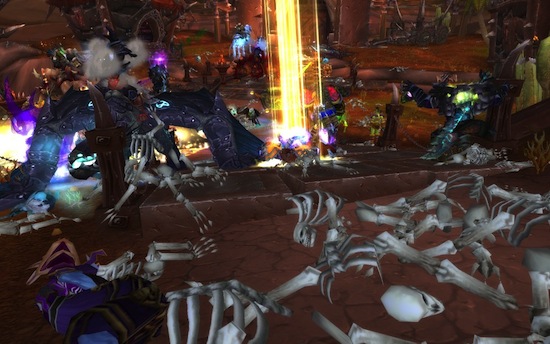 A bug in World of Warcraft allowed Death Knight players to cast plagues on friendly characters, triggering untold levels of destruction in Azeroth on Friday night. Players looking to enjoy a regular raiding, looting, questing session of WoW may have been met with a rude awakening when they logged on to find that whole towns of players and NPCs had been turned into piles of bones.

Coincidentally (or not), the glitch just happened to trigger one day of the seventh anniversary of WoW‘s infamous “Corrupted Blood plague”, which involuntarily spread from players to pets to NPCs, killing just about everybody back in 2005. However, unlike the Corrupted Blood incident, which spread from character to character without direct contact, this week’s plague was caused by spells that had to be cast by human players. In other words, when given supreme power over their virtual world, players immediately decided the the best thing to do was go on a killing spree, wiping out everything in their path.

Blizzard managed to patch out the glitch on Saturday morning, but by then the damage had already been done. Killing NPCs, including shop-owners and quest-givers seems like a douchey thing to do, since it pretty much ruins things for everybody else. Then again, I would be way more interested in MMOs if crazy, unpredictable stuff like this happened more often.