World of Warcraft Sees Cities Nuked by Hacker, Surprisingly Not a Plague-Related Event 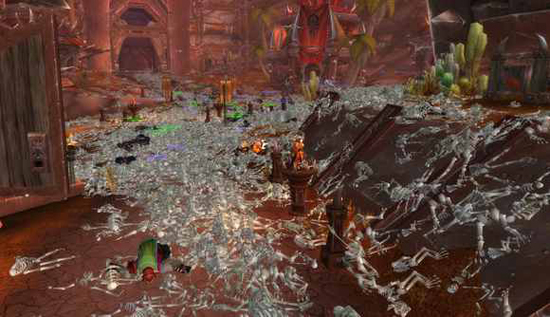 Every so often, a glitch or exploit will be discovered that causes massive amounts of World of Warcraft folks to die. This typically has something to do with incorrectly set flags, or similar circumstances, that then cause a chain reaction as more folks exacerbate the problem. It wasn’t that long ago that Death Knights found they could cast their plagues on friendly units and caused a mass extinction of their own. Yesterday, an exploit was used to fly around killing everyone in range, thus nuking entire cities across multiple servers.

Though it’s already been fixed by Blizzard, the actual method used to accomplish the feat is still being debated. Their official response on the matter from Community Manager Nethaera basically only confirms that it was, in fact, an exploit:

Earlier today, certain realms were affected by an in-game exploit, resulting in the deaths of player characters and non-player characters in some of the major cities. This exploit has already been hotfixed, so it should not be repeatable. It’s safe to continue playing and adventuring in major cities and elsewhere in Azeroth.

As with any exploit, we are taking this disruptive action very seriously and conducting a thorough investigation. If you have information relating to this incident, please email [email protected] We apologize for the inconvenience some of you experienced as a result of this and appreciate your understanding.

Given the wording, it seems like not all the pieces have fallen into place just yet. If Blizzard knew exactly what had happened, chances are they would have said so to eliminate any potential anxiety players might have to return.

One of the current popular theories is that a rogue GM managed to keep some of their powers. Another theory suggests that an ability to kill those around the user was incorrectly marked as public, at which point the hacker exploited it. Yet another suggests that the Battle.net breach back in August eventually caused this catastrophe.

For now, all we have is speculation. At least we got another amusing batch of screenshots with huge piles of dead toons in them out of it.