Cramming Bacon Up Your Nose Can Stop Nosebleeds | The Mary Sue

Cramming Bacon Up Your Nose Can Stop Uncontrollable Nosebleeds 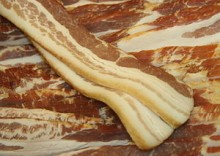 So you’ve got a nosebleed; what are you going to do? Tilt your head back? Cram some tissues up that schnoz? How about stuffing the offending nostril with bacon? Yeah, sounds like a good idea, doesn’t it? Surprisingly enough, it might be. A new medical study details the experiences of a 4-year-old child with Glanzmann’s thrombasthenia who’s life was saved, twice, by “[c]ured salted pork crafted as a nasal tampon and packed within the nasal vaults successfully stopped nasal hemorrhage promptly, effectively, and without sequelae.” Yum.

Ok, fine. But this just helped for one kid who happened to get pork-meat slammed into his nosehole. Who’s to say it’s a general cure? Well, no one yet, definitively anyways. There is however, a surprisingly long tradition of cured pork as a nosebleed dam, the technique having been praised by 3 seperate doctors in 1940, 1953, and 1976. Presumably the trend never caught on because, well, what a waste of meat. Granted, there’s no real explanation as to why this seems to be working, so it’s all anecdotal evidence. Then again, there was this one time I used an anecdote as evidence, and it turned out I was right, so who knows.

I hereby propose a new term for “having a nosebleed” : “snorting bacon.” Feel free to use that whenever the opportunity arises, just remember to credit me profusely, to the extent it becomes irritating to all involved, irritating enough to cause nosebleeds. For the time being, enjoy that bacon next time you have it for breakfast.

Relevant to your bacon