BaconAir: The Greatest Invention of This or Any Century 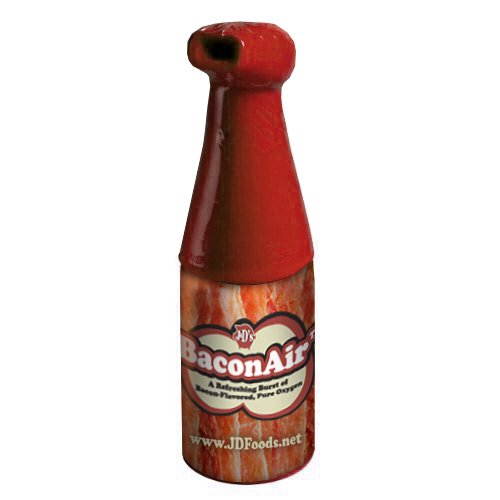 J&D’s Foods, the amazing folks that brought you the much-lauded Baconsalt, have unleashed their latest bacon creation: BaconAir. According to their site, BaconAir came about after discussing the next logical step for bacon after Baconsalt. After all day brainstorming, the team hit on a key question:

What if bacon was lighter than air?

It was that last question that got the dialogue really going and led to another seemingly ridiculous question – what if bacon was air? After all, oxygen is the most important nutrient to the cells in your body, and plays an integral role in almost every bodily function. And bacon is the most delicious of meats.

One thing lead to another, and BaconAir was born. The concoction is a “refreshing burst of bacon-flavored pure oxygen,” and uses the extra-healthy 95% pure Himalayan oxygen. It is also fat and calorie free and, Kosher, and available now for pre-order. Surely, this will be imitated at shifty oxygen bars across America, but accept nothing but the original BaconAir.

Now, there may those among you that do not share my passion for this delicious, aerosol product. Let me tell you a story: When I was but a lad, I suffered (as I still do) from nasty seasonal allergies. To combat these, I was once prescribed a nasal spray that I was told would cure all that ails me. After spraying it up my nose for the first time, I immediately noticed an overwhelming floral odor, that was about as much like flowers as platapi are like birds. This was disconcerting, but not really a problem until I wandered into the kitchen where bacon was being fried. Even standing next to the griddle, I smelled nothing but those awful, fake flowers.

Now, BaconAir seems to be more of taste, rather than smell, experience. But just imagine, if you will, that this amazing bacon-based technology had been widely available in my youth! That wretched medicine would have been tolerable, nay desirable, and my whole life would have gone down a far more beautiful path whose glories I am not even worthy to contemplate.

So, friends, buy some BaconAir and support this amazing breakthrough in meat consumption. Do it because you love bacon, but do it mostly for the children. Because they are our future, and the need more bacon-related products.