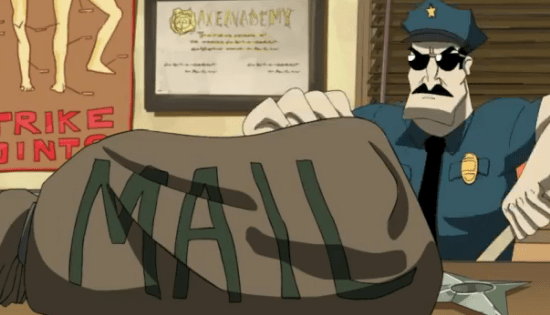 If you think a comic written by a five-year-old and then drawn by his 29-year-old older brother would be awesome, you would be right. That’s the story behind Axe Cop. It started in 2010 as a webcomic written by then five-year-old Malachai Nicolle and drawn by his older brother Ethan Nicolle. It’s grown into a comic book published by Dark Horse Comics, a series of animated web videos, and now a full-fledged animated series. Fox has announced the show will premiere on Saturday, July 27th as part of their new Animation Domination High Definition line up.

Fox’s Animation Domination High Definition (ADHD, an abbreviation I can’t image them keeping for long) looks to mimic the Adult Swim model of late night animation for grown-ups. That’s not surprising considering it’s being run by Adult Swim alum Nick Weidenfeld. He’s allegedly been trying to bring Axe Cop to television since before his move to Fox, but it hasn’t happened until now. I’m glad it did. Axe Cop is the best.

Any hesitations that fans may have about whether Axe Cop is going to translate into a show as good as the comic, they need only been told that Axe Cop himself is being voice by Nick “Ron Swanson” Offerman. The cast will also include Patton Oswalt, Peter Serafinowicz, and Megan Mullally, who also happens to be Nick Offerman’s wife.

The block will also include the new show High School USA! which will star Mandy Moore and Mad Men‘s Vincent Kartheiser, and an as yet untitled project by brothers Keith and Kenny Lucas. True to the Adult Swim model, each episode will only run fifteen minutes.

If you’d like a taste of Axe Cop check out this sample video from October. It features Offerman in his role as Axe Cop in one of the popular Ask Axe Cop videos where a child asks Axe Cop what he does for Halloween. It’s pretty great.