ASIMO Embarrasses Himself, Might Not Be Ready to Lead the Robot Rebellion Just Yet

Robots generally make me uncomfortable, but even I'll admit ASIMO is kind of cute. Especially when he screw up. 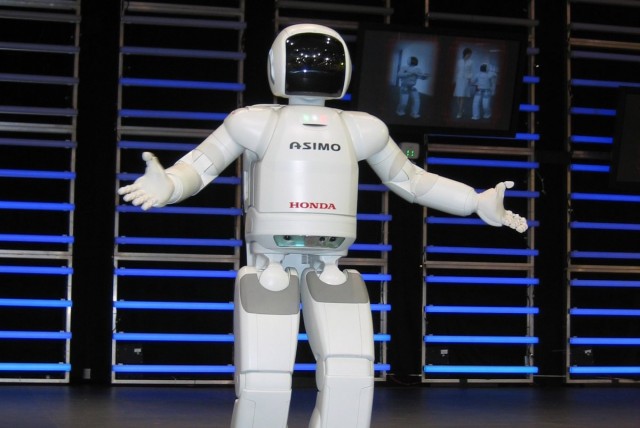 If anyone was worried that Honda’s humanoid ASIMO robot would lead the machines in their inevitable uprising against humankind, it’s probably going to be a while. In a demonstration in Tokyo this week ASIMO kept mistaking reporters phones for their hands. It just kept asking “Who wants to ask ASIMO a question?” No one does, ASIMO. They were just trying to take your picture with their phones.

ASIMO was on display for reporters at Tokyo’s National Museum of Emerging Science and Innovation (or Miraikan for short). The robot was going to perform a neat trick at a Q&A where it would use it’s cold, calculating computer brain to know which reporter raised their hand first. Things ground to a halt when reporters tried to take cell phone pictures of the mechanical marvel, which ASIMO mistook for someone raising their hand to ask a question.

Since ASIMO doesn’t have any voice recognition features yet, the reporters had to pick from one of four pre-selected questions. Talking to ASIMO is essentially like chatting with an NPC in a video game, which as any gamer can tell you is incredibly frustrating. Voice recognition features are expected in the future, but for now, ASIMO can’t hear you scream.

Honda’s certainly trying their best to bring about the robot apocalypse with ASIMO, but at the rate the little tike is progressing, we’ll all be dead from old age long before it presents any real threat.

(via The Verge, image via Brian Warren)