We're one step closer to C3P0 -- or the Terminator, depending on who you ask. 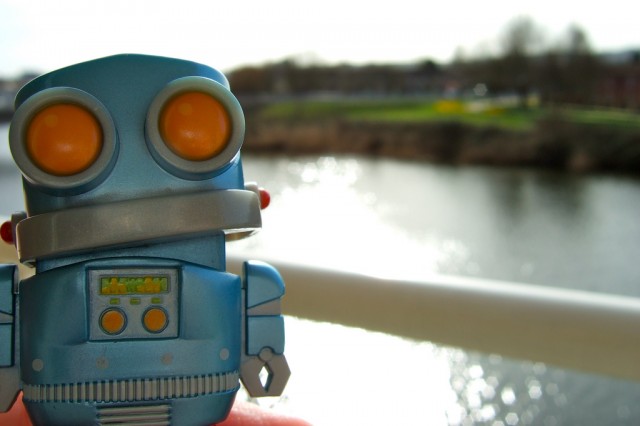 Roboray, the latest humanoid robot from Samsung, has a new trick up its sleeve. Thanks to new visual recognition software developed at the University of Bristol, the automaton can build real-time, 3D visual maps of its environment. The new software lets Roboray look at its surroundings and create a map of them as it moves — or as things move around it — and retain that information to remember where it has been before, which brings us one step closer to having autonomous robots walking around. If you’re a fan of that idea, it’s great news! If you’re not, commence being terrified…now.

By building its own real-time maps, Roboray is able to more easily navigate areas where traditional means of finding its way — like GPS — might not be available. The robot’s mapping ability is complicated by the robot’s movement style, though. Roboray walks like a real person rather than rolling along in constant contact with the floor like many other robots. Most humanoid robots that can walk do so by bending their knees to keep their center of mass constant, but Roboray falls a bit with each step — which is actually an imitation of how we humans walk. The thought that we’re constantly falling is a little disconcerting, sure. But we’re also hurtling through space at incredible speeds on a giant chunk of rock. Just try not to think about it. Instead, take comfort knowing that using gravity to keep moving forward is more energy efficient, and looks more natural.

The researchers hope that these increasingly human characteristics like natural, independent movement will pull robots out of the “uncanny valley” and make them more accepted by people. The humanoid shape and movement also makes Roboray a good platform to test how similar robots can use tools and areas typically meant for people. Soon scientists hope to develop machine intelligence that would enable Roboray and other robots to interact with humans in a way that won’t creep everybody out.

You can learn more about the latest work on the Roboray in a paper published this month in the journal Advanced Robotics. If you’re not feeling up to reading an abstract, though,  that’s fine too — you can also check out Roboray showing off its sweet moves in this video from late last year: