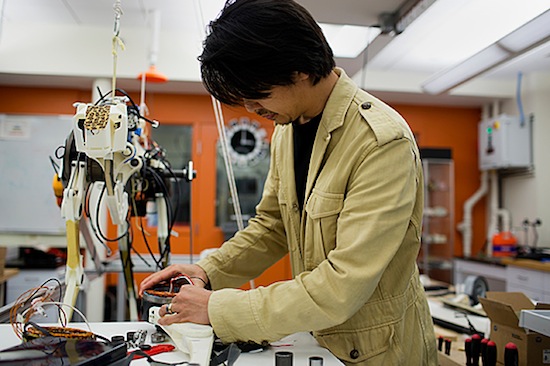 Taking cues from animals when designing robots is all the rage right now, and the big cats have been a particularly popular creature among engineers. We’ve looked at fast models designed by DARPA and air-powered examples from Osaka University in Japan. Not to be outdone, researchers in MIT’s Biomimetic Robotics Lab have been hard at work on their cheetah-bot for more than a year, but unlike other labs that are aiming to mimic the feline’s famous fleetness of foot, Sangbae Kim and his team at MIT are concentrating on building a more energy-efficient robot that can go farther on less power.

Rather than a gas-powered generator or bulky battery pack, MIT’s cheetah is powered by four smaller electric motors set in its shoulders. These motors produce a high level of torque while wasting very little heat, meaning that all the energy provided to them can do what it’s meant to — power the robot. More energy savings come from the design of the robots legs. Rather than being equipped with traditional dampeners or shock absorbers to dissipate impact when a robot’s limb hits the ground, the legs of the MIT cheetah let it harvest energy from those impacts. Feeding that energy back into the robot’s power system can help it run longer.

A more efficient robot, says Kim, could be more helpful in disaster scenarios or search and rescue missions, where the ability to travel long distances and operate over a series of hours may be more important than the capacity for bursts of top-flight speed. According to Kim’s most recent treadmill tests, his cheetah robot is already more energy efficient than well known robots like ASIMO and Big Dog — it’s almost as energy efficient, in fact, as a real cheetah.

True, the top speed till leaves something to be desired, as illustrated in the video below, but Kim and his colleagues are working on a new generation of motors that he’s hopeful will be able to maintain energy efficiency while reaching speeds of more than 30 miles per hour.