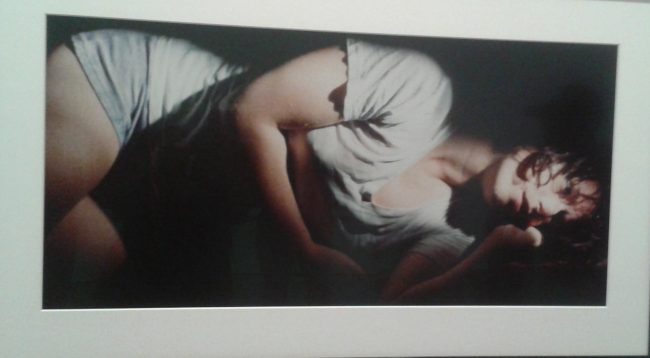 Photo by Cindy Sherman at The Broad Museum in Los Angeles

As most women know, and as the world is becoming increasingly aware, sexism and sexual harassment and assault are not limited to the entertainment industry. Everywhere, from tech to government to sports, there are predators, mostly men, who feel so entitled to sex that they use their positions of power to take it from people. This time, it’s the art world.

As reported by The New York Times last week, Knight Landesman, publisher of Artforum, one of the art world’s premiere magazines, resigned from his position in light of a lawsuit brought against him by nine women who’ve either worked for him or met him at art events and been sexually harassed or assaulted by him, sometimes followed by him retaliating against them if they spurned his advances.

Today, over 500 female artists, writers, curators, and filmmakers have signed a letter standing with the women of the lawsuit and “pledging to fight against sexism in the art world.”

The letter began in a WhatsApp chat with only ten members of the arts community on October 24th. By the next day, the group increased to 125 participants and kept growing. Says Vanessa Carlos, a co-founder of the London gallery Carlos/Ishikawa, who was on the original group chat:

“The idea came very quickly to draft this letter. It was amazing to witness this huge group of people across different continents formulating this letter together. There are a lot of stories that women shared in the WhatsApp group, and a lot of them are not ready to come forward publicly. It was really hurtful to know that they still didn’t feel they could come forward, even in the current conversation.”

Since the letter was released today, 1800 cis and trans female and gender-nonconforming artists like Laurie Anderson, Cindy Sherman, and Lynn Nottage had signed. Other signers include Phyllida Barlow, Dominique Gonzalez-Foerster and Tania Bruguera. The letter uses text from artist and co-signer Jenny Holzer’s work, “Abuse of Power Comes As No Surprise:”

“We are not surprised.

We are artists, arts administrators, assistants, curators, directors, editors, educators, gallerists, interns, scholars, students, writers, and more—workers of the art world—and we have been groped, undermined, harassed, infantilized, scorned, threatened, and intimidated by those in positions of power who control access to resources and opportunities. We have held our tongues, threatened by power wielded over us and promises of institutional access and career advancement.”

The letter goes on to stress that open secrets will no longer be tolerated in the art world saying, “Your actions will no longer be a secret, whispered amongst us for fear of ostracization, professional shunning, and recrimination. Where we see the abuse of power, we resolve to speak out.”

It also announces the start of an online campaign, Not Surprised, across social media. Ruba Katrib, signer on the letter and curator at MoMA PS1, said, “This is really an initial step of what most people have expressed desire to be a longer-term engagement. There’s a real recognition that needs to take place that this is an actual problem and affects a huge percentage of people working in the contemporary art industry.”

Meanwhile, the rest of the staff at Artforum and its sister publication, Bookforum, have signed their own letter condemning not only Landesman’s actions, but how his co-publishers Anthony Korner, Charles Guarino and Danielle McConnell, have handled it and represented them. They say:

“We, the undersigned staff of Artforum and Bookforum, condemn the way the allegations against Knight Landesman have been handled by our publishers and repudiate the statements that have been issued to represent us so far. We are committed to gender justice and to the eradication of sexual harassment in the art community and beyond. We are now gravely aware of the work that needs to be done at our own publication, and call on the publishers to work with us to create radical and lasting change. There is much more to be said, and in the future we will be addressing these events in greater depth. Our intent right now is to state our position unequivocally.”

Because here’s the secret about powerful people: they’re only as powerful as everyone around them allows them to be. It’s like Negan on The Walking Dead. If people didn’t listen to him, or decide they needed someone to take power in the way that he did, he’d just be some dude with a baseball bat. Money is only valuable, because we’ve all agreed on a system that makes it valuable. Otherwise it’s just paper and metal, or digits in a computer system. Power is taken, but power is also given, and it doesn’t have to be.

So sure, people can “threaten people’s careers.” But what if the rest of us hired those people, ignoring abusers’ “blacklists?” What if we all decided to take the power we so willingly bestow on heads of companies, or those with lots of money, and instead chose to bestow it on the employees, the marginalized, the abused? Think of what could happen.