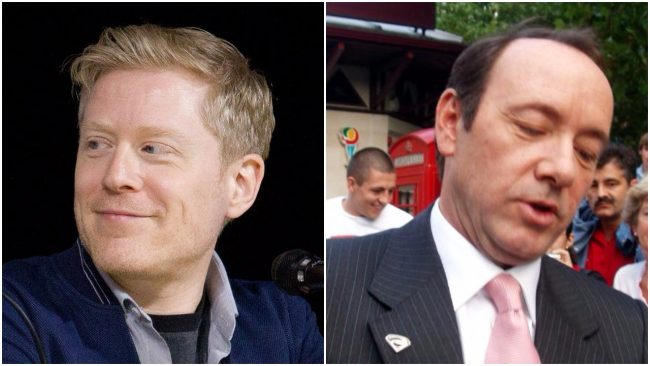 Star Trek: Discovery and longtime theater actor Anthony Rapp gave a harrowing account to Buzzfeed of being the target of Kevin Spacey’s advances when he was only 14 years old. Hours after the article with Rapp’s story emerged, Spacey attempted to dodge the accusation with a mealy-mouthed apology and coldly calculated public “coming out,” as though the status of his sexuality excused preying on a teenager.

Rapp, who identifies as queer, has been starring on stage since age 9 and originated the role of Mark in RENT alongside a host of Broadway and movie accolades. He told Buzzfeed a story he’d been sharing with trusted friends and family since 1999. The article, “Kevin Spacey Made A Sexual Advance Toward Me When I Was 14,” is frank and to-the-point, detailing the incident and Rapp’s subsequent struggle to process what happened as Spacey’s star rose and rose. He lays out how he had come to be alone in Spacey’s bedroom at the age of 14, following a party at the actor’s apartment, and what happened next:

Rapp said he ended up wandering into the bedroom, sitting on the edge of the bed, and watching TV well past midnight.

At some point, Rapp said he turned to see Spacey standing at the bedroom door. And that’s when he first realized that everyone else had left the party. They were alone.

“My memory was that I thought, Oh, everybody’s gone. Well, yeah, I should probably go home,” Rapp said. Spacey, he recalled, “sort of stood in the doorway, kind of swaying. My impression when he came in the room was that he was drunk.” Rapp doesn’t remember Spacey saying anything to him. Instead, Rapp said, “He picked me up like a groom picks up the bride over the threshold. But I don’t, like, squirm away initially, because I’m like, ‘What’s going on?’ And then he lays down on top of me.”

“He was trying to seduce me,” Rapp said. “I don’t know if I would have used that language. But I was aware that he was trying to get with me sexually.”

Rapp was able to flee from Spacey’s apartment, but not before the then-26-year-old Spacey doubled down: “And he was like, ‘Are you sure you wanna go?’ I said, ‘Yes, good night,’ and then I did leave.”

Rapp says that he was inspired by the women coming forward to speak out about Harvey Weinstein’s behavior to share what had happened with Spacey. According to Buzzfeed, “… the Weinstein story hit, and the cumulative effect of woman after woman coming forward to share their stories of harassment, coercion, assault, and rape compelled him to tell his story.”

Spacey—whose sexuality has been a subject of debate and speculation that he was gay rampant for as long as I can remember reading celebrity gossip—released a statement on Twitter shortly following the article. His camp had clearly known what was coming (asked prior to publication for comment), and his crisis control strategy is hugely problematic.

Spacey claims to not remember the incident with Rapp and says that if it happened, it was the result of “inappropriate drunken behavior,” one of the favorite excuses of sexual harassers and assaulters. (Notice how when a victim is drunk it makes the crime their fault, but when the perpetrator is drunk, that’s supposed to magically excuse their behavior?)

Then Spacey puts an end to decades of speculation about his sexuality: “I have loved and had relationships with men throughout my life, and I choose now to live as a gay man.”

By all means, let Kevin Spacey finally live this truth. But the calculated attempt to leverage his sexuality and coming-out as some kind of shield against allegations of molesting a young teenager is disgusting. Not only does his choice to “live as a gay man” have no bearing on the situation with Rapp, but it brings up some of the worst, hateful, false claims that have been used to attack gay men for a very long time—the idea that they will prey on young boys and men. Kevin Spacey is alleged to be a predator, but that has absolutely zero bearing on his sexual orientation.

Double shame on Kevin Spacey for calling on the old, tired, erroneous, and harmful idea that there’s some link between gayness and sexual predation as a distraction from his wrongs.

Rapp’s allegation is hardly a surprise to anyone who has worked in or closely watched the entertainment world. Rather, it seems to be confirmation of yet another Hollywood “open secret” that has been ignored for years concerning Kevin Spacey. Just as women use “the whisper network” to give each other a heads-up about men to avoid, gay men have whispered about Spacey.

One of the very first things I was told as a young gay man working in media, nearly a decade ago, was that Kevin Spacey preys on teen boys.

Over the last 7 years I have heard so many more horror stories about this guy. Ev. ery. one. knows.

While Spacey’s PR spin tactic seems to have worked in some respects—plenty of outlets are highlighting his coming out over Rapp’s allegations, it isn’t so easy to pull the wool over social media’s eyes. Twitter—and the LGBTQIA community—is not having this.

Kevin Spacey has just invented something that has never existed before: a bad time to come out.

Nope to Kevin Spacey’s statement. Nope. There’s no amount of drunk or closeted that excuses or explains away assaulting a 14-year-old child.

Kevin Spacey really tried to throw the entire LGBT community under a bus and call it solidarity in an effort to mask his personal failings.

No, Kevin Spacey. You don’t get to use your sexuality as a distraction from sexual assault.

You just threw the gay community under the bus.

The focus here should be on Anthony Rapp’s story and standing in solidarity with him and others who may begin to share their own experiences regarding Spacey and other powerful Hollywood men whose sexuality has absolutely nothing to do with their egregious behavior toward those with less power. “Part of what allowed the Harvey situation to occur was that there was this witting and unwitting conspiracy of silence,” Rapp told Buzzfeed. “The only way these things can continue is if there’s no attention being paid to it, if it’s getting forgotten.” We’re not about to forget what is alleged of Spacey—and the awful way that he responded—anytime soon.

Here, I fixed it for you. pic.twitter.com/6Gn5FyPeZe