Apple May be Including Yelp Check-Ins in New Map App, Perhaps Snuggling Closer? 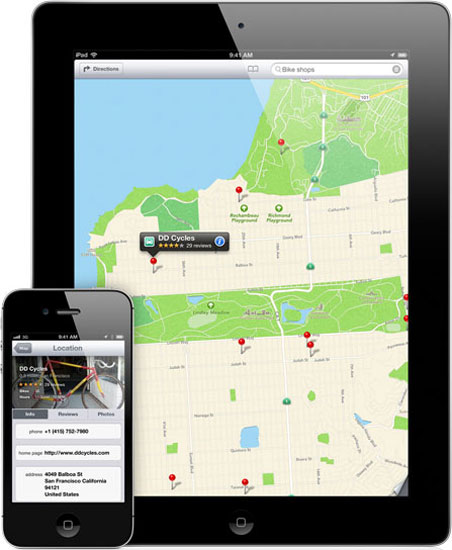 When Apple first unveiled the iPhone in 2007, one of its most immediately useful features was Google Maps integration. However, the partnership was short-lived as Apple has since moved to push Google out of bed, going so far as to roll its own map app debuting in iOS 6. Now, Apple may go a step further by baking Yelp check-ins right into the map app.

Looking through the Apple developer kit, Bloomberg reports that it has found screenshots of Yelp check-ins being used in conjunction with the map app. Apple’s own information on the forthcoming built-in app did say that it would include Yelp reviews, but made no mention of this kind of tight integration. According to Bloomberg, both Yelp and Apple have declined to comment.

The check-in war was one of those online conflicts that hasn’t grabbed a lot of headlines, but that has been quietly simmering in the background for a few years now. FourSquare is the king of check-ins, while competitor Gowalla was recently snatched up by Facebook — which already has its own check-in system. Google has also been pushing its own system.

The alliance between Apple and Yelp could be the result of horse-trading; Apple gets the reviews, Yelp gets baked-in integration on a highly successful and highly desirable smartphone. Placing the check-in option right on the phone might give the service a serious bump in business, especially as Yelp attempts to expand. However, with so little information, it’s all just typical Apple crystal ball gazing.

iOS 6 is slated to release this fall, so it will be some time before we get a closer look at what’s going on under the hood. Expect to see some major activity from the other check-in players in the meantime.