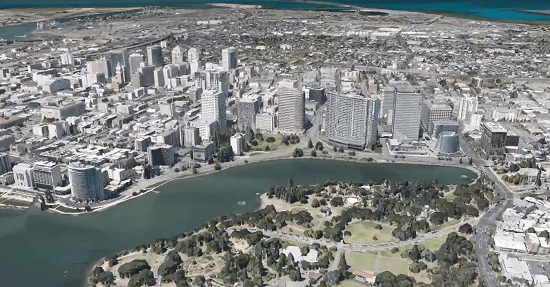 Apple may be planning to drop Google as the default iOS map program, opting for an in-house app with 3D-map capabilities, but now Google is bringing 3D action to the table, too. Starting today, Google is beginning to roll out full 3D maps of metropolitan areas for Google Earth mobile, and plans to render every area with a combined population of 300 million by the end of the year.

This new functionality is thanks to a number of things, such as rendering techniques which allow 3D cityscapes to be automatically generated from 45-degree aerial imagery. But that’s not where the new techniques and functionality end; Google has also introduced the Street View Trekker, which is essentially just a Street View Camera mounted on a dude. Between these two announcements, it’s fair to say that all Google mapping products are going to be getting even more comprehensive in the next few years.

Aside from the new tech, Google’s breaking out some new functionality tweaks that could come in handy. Offline Google Maps for Android is on the way, which will allow users to store and view maps from over 100 different countries even without an Internet connection. It’s unclear whether you’ll pick your offline maps by region, or cache what you need ahead of time, but finally you’ll be able to plot your next move while you’re on the subway, instead of struggling to get your bearings on a busy street corner.

Apple’s imminent adoption of an in-house map app was framed by a discussion of functionality, but there are bigger things at play. Naturally, Apple and Google are in competition for the mobile hardware market with the iPhone and Android platform respectively, and this new Google maps functionality is only the beginning of the mobile map app arms race.

Hopefully the fight continues to heat up, because we all benefit from the results. I don’t know about you, but I want to be able to use dynamic map data for tracks in a racing game sooner rather than later.