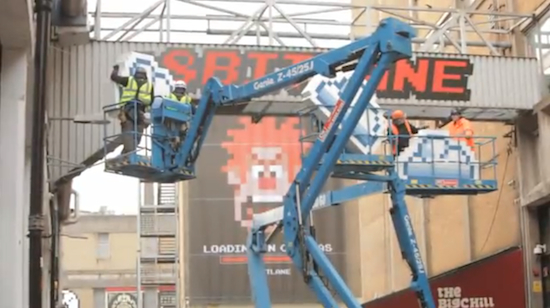 Disney’s Wreck-It Ralph may have come and gone for us yanks in the United States — hey, we at least have an expedited digital release to look forward to this February — but our friends over in the United Kingdom are gearing up for the film’s countrywide debut, and they did it the best way they knew how: By turning East London’s Brick Lane shopping thoroughfare into #8bitLane this past weekend. Although Wreck-It Ralph won’t be hitting theaters across the pond until February 8th, Londoners were treated with the opportunity to explore the world as the animated feature’s titular hero would see it, complete with life-size 8-bit models of trees, dogs, pigeons, and other common urban sights — all designed and crafted by sculptor Aden Hynes and his team at Sculpture Studios. Fortunately, the promotion wasn’t plagued by adverse weather conditions or programming bugs, and so far as we can tell, no one was injured by having a plumber land on them. Keep reading for a look at the results, and the work that went into them.

To see how Hynes and his staff of designers brought these 8-bit objects to life and the level of work that went into transforming Brick Lane into a veritable Shangri-La for aficionados of ’80s gaming culture, check out the quick behind-the-scenes video below that will make you wish you were living in East London at the time.