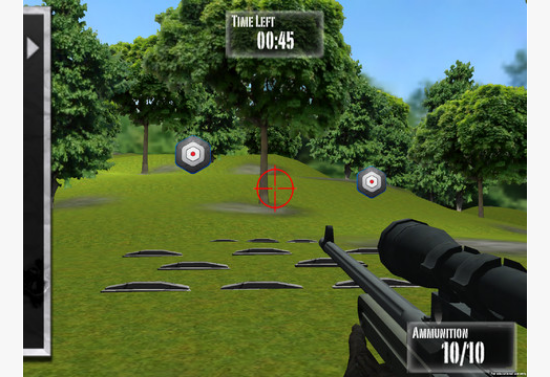 There have been a lot of people blaming violent video games for gun violence in America, especially in the wake of the tragic Newtown, Connecticut shootings. Chief among them, of course, was the National Rifle Association. In his comments after the shootings, NRA CEO Wayne LaPierre blamed several video games that featured guns, like Bulletstorm and Splatterhouse, but left off titles like NRA: Varmint Hunter and NRA: Gun Club. He also failed to mention the new NRA branded iOS game which must have been in development at the time, NRA: Practice Range. The new game is recommended for ages four and up, probably because they don’t want kids younger than four to see how much fun super-cool guns can be.

The game touts itself as the new “mobile nerve center” of the NRA. It includes links to the NRA’s site on topics such as news, gun laws, safety tips, and educational materials. It also includes nine “true-to-life firearms,” different shooting ranges, and of course Game Center integration so you can show your friends how much better you are at guns than them.

The game starts you off with an M9 handgun in an indoor range, but more guns can be purchased in-game for $0.99 each. We assume there’s no simulated background checks or waiting period for purchasing new simulated weapons. Players have one minute to fire off as many rounds as possible, and are scored for accuracy, so make sure you aim for the head if you really want to rack up a high score!

To the NRA’s credit, the links to the educational and safety materials are a great thing to give people in a mobile app. The easier it is to access gun safety information the better, and if children are going to be around guns they should be taught gun safety at an early age. Safety and education can go a long way to prevent gun violence and accidents.

Just, from a public relations Protip standpoint, NRA: maybe don’t include a mini-game where you fire guns in an app you’re recommending for ages four and up less than a month after you publicly blame video games with guns in them for a tragic event. It makes you look bad, and you didn’t look that great to begin with on this one.

(iTunes Store via The Next Web, image via iTunes)