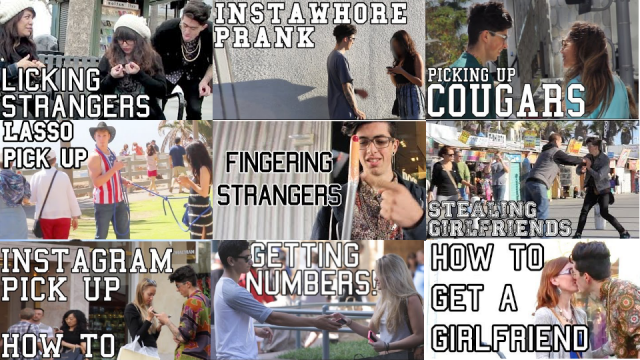 Yesterday, the YouTube community was rightfully disgusted by ex-Big Brother housemate Sam Pepper’s latest video, “Fake Hand Ass Pinch Prank,” where he sexually harasses women in the street and attempts to pass it off as a prank. Today, Pepper has issued something that is, I think, supposed to be an apology; but is actually just self-congratulatory back-pedalling.

We gave you all the details about Pepper’s “Fake Hand Ass Pinch Prank” video and backlash over in this article, but the Cole’s Notes are these: Pepper approached women on the street and sexually assaulted them by pinching them without consent. The YouTube community, most of the internet, and any human being with decency were understandably appalled by the video and the way in which it perpetuated rape culture.

After a #ReportSamPepper hashtag, a viral open letter, and huge media attention, YouTube did eventually remove Pepper’s original ass-pinching video for violating their policy on sexual content. YouTube has not, it’s worth noting, removed any of Pepper’s similar videos, in which he also sexually assaults women. You know, like “How To Make Out with Strangers,” where he coerces women to make out with him; and “How to Pick Up Girls with a Lasso,” in which he physically restrains women on the street.

In Pepper’s first follow-up, he gets a female friend of his to carry out the same ass pinching prank on unsuspecting men in the street. This video, and the repost of his original video, end with a disclaimer, stating that they are “staged and scripted” as “part of a bigger picture.”

In his third video, which I refuse to embed because I don’t want to give this guy any more money or views than he’s already received, Pepper speaks for six straight minutes about “why” (retroactively, of course) he made the first video. To save you having to watch it, here’s the breakdown of his explanation.

After speaking about sexual abuse statistics for both men and women, Pepper then tells a story about how a male friend of his was assaulted in a relationship, and goes on to talk about how men are also frequent victims of sexual abuse. In all other cases, I would be glad that someone is calling attention to the fact that patriarchal views on gender roles harm all genders; but sadly, in this case, it reads like an MRA crying “But bad things happen to men, too!” Because Pepper has never heard of irony, he goes on to complain about how uncomfortable he’s felt at conventions when female fans have grabbed his ass without permission. Hmm, then perhaps you should refrain from posting videos normalizing the violation of personal space?

Pepper says that we “should be offended by” sexual harassment, and that he feels like it’s “nice to see how society is finally catching up on how this can affect women.” He says that his first two videos are the result of “want[ing] to do something that could highlight the difference between abuse towards a woman, and abuse towards a man, by doing a social experiment with you as the unwitting participants at the heart of the experiment.” Pepper says that he used sexual harassment in the experiment so that he could “pass it off as a prank, pretend it’s harmless, and watch all you guys go crazy in the comments. And I’m so glad you did. I’m happy that I live in a society where the honor of a woman is protected at all costs.”

I would much rather live in a society where a woman’s “honor” didn’t have to be protected, and instead people just didn’t sexually harass other people, but hey. That’s me.

The real crux of his experiment, according to Pepper, was to show that “in many cases, people will be outraged at an act aimed towards a woman, but then just laugh it off when it’s a man. I don’t want to turn off a light on a very real and scary issue that women face; I just wanted to shine a light towards an otherwise dark corner: abuse on men.” Pepper continues by talking about how harmful society’s expectations of masculinity can be to men; how it stops them from asking for help, or from expressing themselves fully. For a minute, his video actually echoes Emma Watson’s HeForShe speech at the UN, and it’s the only part of the video I can truly appreciate. Even if I think he’s lying about the original intent of his first video, there’s no doubt that this point is both salient and important.

But the fact remains that Pepper has many, many other videos in which he harasses women, and these “male version” and “apology” videos only popped up after all of this media backlash. SEX+ YouTuber Laci Green, who wrote the initial open letter to Pepper (which has over 100,000 cosigners, including Wil Wheaton, Hank Green, Tyler Oakley, Vi Hart, ALB, Meg Turney, Grace Helbig, Hannah Hart, and more) spoke out on Twitter about Pepper’s “reveal” videos in her usual eloquent way.

Call it a “prank” or an “experiment”, if you touch someone w/o consent, and promote that as comedy, you are part of the problem. @SamPepper

I have a hard time believing, that had there not been such incredible backlash, that a “big reveal” would have been made at all. @SamPepper — Laci Green (@gogreen18) September 23, 2014

I’m grateful for the acknowledgement that sexual harassment is serious! Here’s to no more videos violating people in the future. @SamPepper

(PS: @SamPepper has made MANY videos violating women over the years, so this video isn’t the only point of concern. Kthxluvyabye.) — Laci Green (@gogreen18) September 23, 2014

.@sampepper Assault is upsetting Sam, and we really want you to stop treating people like this. It’s that simple. This isn’t the first time. — Laci Green (@gogreen18) September 23, 2014

.@sampepper You’re capable of treating people better. Aside of your “big reveal”, I really hope you get that, and that you believe it too!

Here’s the fact of the matter: Pepper has made numerous videos in which he harasses women on the street. This “explanation” of his original video as a social experiment smacks of damage control; a band-aid video he made in response to the sudden retaliation against his “non-prank.” Pepper hasn’t posted similar “explanations” for any of his other videos in which he harasses women; I don’t believe we would be seeing this “explanation” were it not for the massive media backlash against Pepper over the course of the last twenty-four hours.

Even if I’m wrong, and Pepper is being completely genuine here (something I highly doubt given his track record and Green’s tweets), that first video – when viewed alone – still props up rape culture. That first video, and all of Pepper’s other harassing videos, normalizes street harassment and sexual violence. It is part of a larger problem in which people think that violating someone’s personal space is funny; that if women don’t want to be approached on the street, maybe they shouldn’t have dressed that way; that if you can’t laugh off abuse, then you don’t have a sense of humor.

There’s no doubt that people of all genders are the victims of sexual abuse, and that gender bias and the way in which we perceive both “masculinity” and “femininity” creates a binary that is harmful to everyone. If that had truly been the point of Pepper’s first video (stated right off the bat), and if he’d never posted anything else ever that featured him sexually harassing women, I might have been able to support him. Unfortunately, that’s not the case, and I still think Pepper is a harasser who doesn’t deserve your views. And that’s that.