Hey, how about no one ever watches this guy's videos again? Yeah? Yeah. 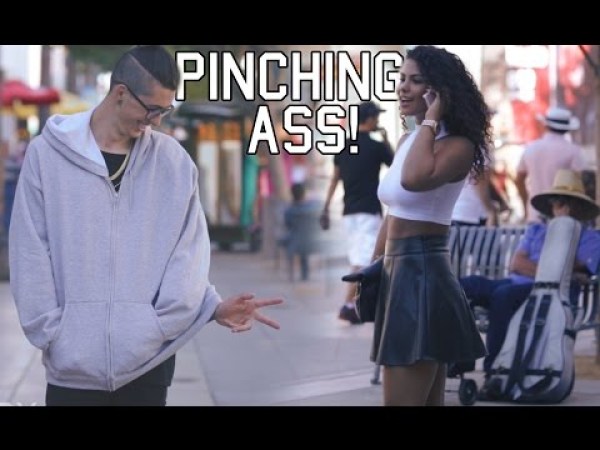 Two days ago, YouTuber Sam Pepper uploaded a video to his channel called “Fake Hand Ass Pinch Prank,” which sees him approaching and violating unsuspecting women on the street. Despite the obvious sexual harassment in the video, YouTube has yet to remove it – and it’s inspired the YouTube community (and the greater internet) to speak out against both the video, and Pepper.

Pepper, an ex-Big Brother housemate, has over two million YouTube subscribers to his “prank” channel, and this video alone has already garnered him almost 1.5 views. I’m not going to be embedding the video here, for reasons that I think should be fairly obvious, but these GIFs pretty much get the point of the video across to you:

It’s important to mention here that pranks, of course, are typically something funny. Unwanted touching or groping from strangers is actually sexual harassment. That’s, you know, kind of a big difference. Let’s remember that The United National General Recommendation 19 to the Convention on the Elimination of all Forms of Discrimination Against Women defines “sexual harassment” as:

“such unwelcome sexually determined behavior as physical contact and advances, sexually colored remarks, showing pornography and sexual demands, whether by words or actions.”

Sadly, it seems that not everyone has such a simple time understanding the difference. Allow me to share this image with you, in order to save you from having to venture into the comments section on the original video, and also to remind you that rape culture is alive and well:

this this is why rape culture & sexual harassment exists #ReportSamPepper pic.twitter.com/NZDJ3OEABL

And that’s not even the only problematic video on Pepper’s channel. In addition to “Fake Hand Ass Pinch  Sexual Harassment,” Pepper has previously posted videos like “How To  Sexually Harass Strangers,” where he pressures women to kiss him on camera; and “How to  Sexually Harass Girls with a Lasso,” in which he literally lassos women on the street. What a charmer. But don’t worry; the internet and YouTube have a superhero, and she is the creator of the SEX+ YouTube Channel, Laci Green. After discovering (and subsequently becoming disgusted by) Pepper’s video, Green wrote an open letter on Tumblr, requesting an end to Pepper’s harassing videos – and for an end to sexual and street harassment. Here’s just a portion of Green’s fantastic call to action:

People don’t like to be violated and they don’t like to see their friends and girlfriends be violated either (hence the group of men that tried to beat you up in the lasso video). And yet, history suggests that perhaps you find this humorous. It is very disturbing that we live in a world where the violation of women and girls’ bodies is not only funny, but profitable, and can garner considerable notoriety and views on YouTube.

We are deeply disturbed by this trend and would like to ask you, from one creator to another, to please stop. Please stop violating women and making them uncomfortable on the street for views. Please stop physically restraining them and pressuring them to be sexual when they are uncomfortable. Please show some respect for women’s right to their own bodies. While it may seem like harmless fun, a simple prank, or a “social experiment”, these videos encourage millions of young men and women to see this violation as a normal way to interact with women. 1 in 6 young women (real life ones, just like the ones in your video) are sexually assaulted, and sadly, videos like these will only further increase those numbers.

Green’s open letter now has 100,000 co-signs, and you can contribute your support by reblogging her post and reporting Pepper’s video on YouTube. Her message has been publicly signed by other prominent internet denizens, like Wil Wheaton, Hank Green, Tyler Oakley, Vi Hart, ALB, Meg Turney, Grace Helbig, Hannah Hart, and more. Creators are also speaking out against Pepper on Twitter, where you too can express your displeasure to YouTube with the #ReportSamPepper hashtag.

For people asking, it’s safe to assume that people who sexually assault women in “prank” videos will not be welcome at future VidCons. — Hank Green (@hankgreen) September 21, 2014

Saddened by @sampepper‘s new video. Sexually harassing women is vile to begin with, but normalizing it by calling it a prank? So harmful.

Very disheartened that Sam Pepper’s video of him committing sexual harassment is still on @YouTube after such a vocal campaign to report it. — Charlie McDonnell (@coollike) September 21, 2014

With a Pepper comes assault. #ReportSamPepper

Treating blatant sexual harassment of women as a “joke” or a “prank” contributes to the toxic culture in which we see this sort of behavior as normal; in which women are told that they must not have a sense of humor if they don’t like it; in which people think women wearing short skirts are “asking for it.” It’s a perpetuation of rape culture, and it’s harmful to people of all genders.

Now, if you’ll excuse me, I’ll be adding my name to the list of people who have reblogged Green’s open letter.

[Update] YouTube has now removed the video in question, citing a “violation of YouTube’s policy on nudity or sexual content.” Which is great, of course. But what about all the other videos on Pepper’s channel that violate the exact same rules? “How To Pick Up Girls with a Lasso” has over a million views, and YouTube hasn’t done a thing about that.

Here’s a tip, YouTube: there might be something tragically wrong with your reporting system when it takes 100,000 signatures on a petition, a massive Twitter hashtag, and the support of people like Wil Wheaton in order to get a video removed from your website for sexual harassment.