Your House Tastes Terrible, Now Go Wrap it in Bacon 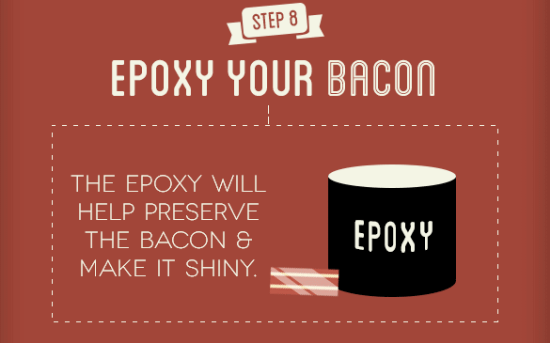 Bacon has a long and proud tradition of being wrapped around things to make them better, but those things are usually food. Would wrapping your house in bacon make it better? Probably, but how does one even begin to go about covering their house in bacon? How much bacon would it take? What’s the best way to affix bacon to a house? What about defending your bacon house from predators? So many questions! Don’t worry. Movoto has a handy infographic to help you sort it all out.

Covering a house in bacon would be a huge undertaking, so if you’re going to do it– do it right. Figuring out how much bacon you need and the cost of it all in advance is the smart play here. Here’s a quick rundown of the steps involved:

The $4.66/lb bacon price works out to be a grand total of $106,533. The price only covers the bacon, and not the necessary staples or recommended epoxy, and you’re bound to lose some bacon along the way, so expect to pay more if you actually do this. That’s a lot to pay for bacon glory, but Movoto claims it will leave you with the most famous house. Maybe it’s worth it?

I won’t promise your house will be the most famous house if you cover it with bacon, but considering I’m writing about the very idea of covering a house in bacon should give you a sense of the attention you and your meat-house would garner. Of course not all of the attention would be positive. A lot of pigs would have to die, and a lot of food would be wasted. Still, though– bacon-house. It’s an interesting idea.