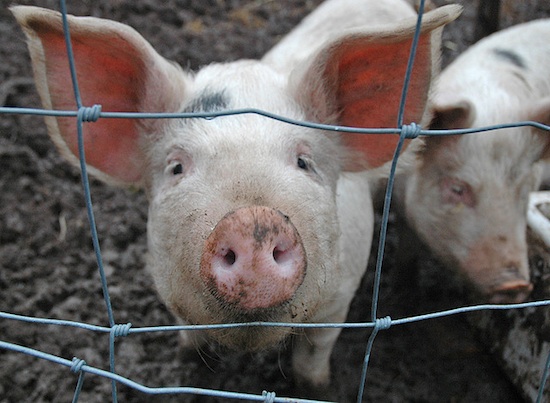 Swedish researchers from Upsalla University and the Swedish University of Agricultural Sciences have sequenced the world’s most delicious genome — that of the pig. The research is important because,  contrary to popular and well-considered opinion, pigs are more than just pre-bacon — they could also teach us a lot about human and animal disease, and those lessons are sure to be buoyed by a better understanding of their genetic makeup. In related news, yes, this also have implications for sausage, bacon, and all the other many delicious meats that come out of the noble swine.

Charting the pig genome shows the the pig’s modern ancestor, the wild boar, probably first showed up about four million years ago in Southeast Asia, and was domesticated about 10,000 years ago. With humans achieving behavioral modernity in the ballpark of 50,000 years ago, that means there were 40,000 years where, as a species, we felt like we had better things to do than domesticate the pig. This is, of course, a decision that is nearly indefensible, but hey, what are you gonna do?

The new genomic sequence also shows the evolution of endogenous retroviruses (ERVs) in pigs throughout time, which can help researchers understand the risks involved in using pig body parts in human surgeries and transplants. As many pig organs are very similar to our own, some researchers feel that  pigs could one day be harnessed as oinking organ farms for humans, with enough leftover for a barbecue to celebrate the successful surgery. Understanding the pig genome gives researchers a better for how feasible that may be, and what hazards these transplants could pose on a genetic level.

Which is all well and good. Really, though, science, just wake us when you get to the part about how this can lead to a more delicious pig. And maybe one that’s less smart? For as many pork products as we consume — and it’s not just a few — we do feel kinda bad about eating an animal that is, generally speaking, very clever and pleasant. Not, like, bad enough to stop or anything, but bad all the same. So if you could harness this information to make pigs tastier and also breed a variety that are kind of jerks, that would be huge for us in terms of satisfying both tummy and mind. Thanks!