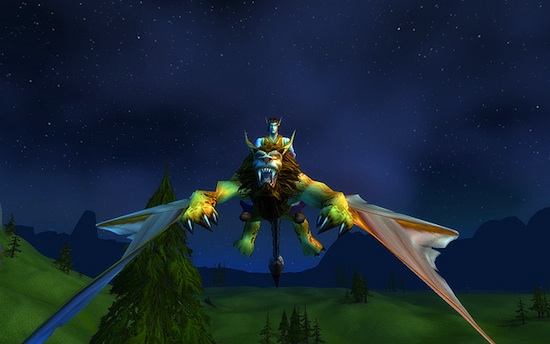 Getting a quick self portrait of your World of Warcraft toon in some newly minted gear. We’ve all been there, posing for posterity. Through some diligent digital detective work, though, a group of players has uncovered something a touch unseemly — every WoW screenshot is tagged with a digital screenshot, leaving a record of the player taking the shot, a timestamp indicating when the picture was captured, and information about the realm the player is in at the time, including its IP address — which could be bad news for players who are running on private servers to escape the monthly subscription fee built into adventuring in Azeroth.

Normally invisible, the watermark consists of a series of repeating numbers that appears to act as a unique code for every WoW character. That code doesn’t include any password information, luckily, nor does it clue anyone who might be taking a look at it in to what the player’s personal IP address might be. So, let’s not all lose our senses, here, is the thing.

Don’t get us wrong: This reveal feels icky and Big Brother-ish at first blush to us, too. That said, Blizzard has made no bones in the past about how serious they are about quashing private servers, which this looks for all the world to be a targeting. That the info could conceivably be found and used by spammers looking to whisper deals in a player’s ear is a bummer, but, man, sometimes you’re just too tired to get up in arms about every little questionable thing done with some information you handed over to the Internet. When one of the major reasons it could be used against you is if you’re already breaking a contract with the company whose product you’re using? Well, it’s even harder to get all that riled.

That said, plenty of people will have a problem of no small dimensions with this — and we’re not saying they’re measurably wrong. Luckily, according to the forum thread at ownedcore, where the news broke, the watermark is disabled in high quality screenshots, offering players a simple workaround. Setting your screenshot quality to high with a readily available command line appears to do the trick and prevent watermarks from embedding in the photos.

As of now, it seems like WoW is the only game affected by the watermarking, which seems to have been implemented between 2008 and 2010. Could be interesting to see if there are watermarks lurking in any of Blizzard’s other offerings, though.