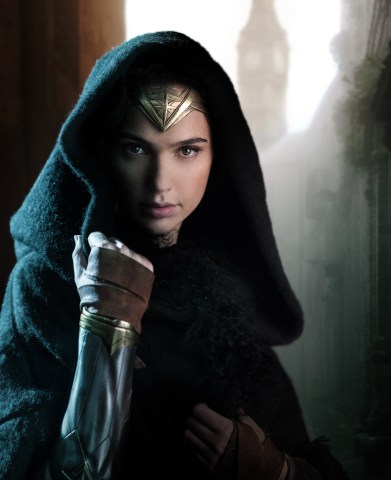 Warner Bros. has finally announced that Wonder Woman is officially in production, and we couldn’t be more excited! Of course, actor Said Taghmaoui accidentally let the cat out of the bag by posting some photos from the set before principal photography had been announced (he promptly deleted them). However, now that it’s been officially announced, there are some confirmations and announcements, as well as this gorgeous new image of Gal Gadot in costume as the eponymous heroine.

Obviously, we already know that Taghmaoui and Chris Pine are in the film, but it’s now been confirmed that Pine is indeed playing Steve Trevor. In addition to those two, the cast includes Robin Wright, Danny Huston, David Thewlis, Ewen Bremner, Elena Anaya, and Lucy Davis, though we don’t yet have confirmation on what their roles are. They’ve also announced some key crew. Matthew Jensen (Chronicle, Fantastic Four) is serving as Director of Photography, Aline Bonetto (Amélie, A Very Long Engagement) is production designer, Martin Walsh (Chicago, V for Vendetta) is editing, and Lindy Hemming (The Dark Knight trilogy) is their costume designer. And, of course, the talented Patty Jenkins will be handling directing duty like a boss.

Wonder Woman is set to drop June 23rd, 2017, though we’ll be getting our first glimpse of Gadot in character in Batman v Superman: Dawn of Justice in March 2016.

Who’s excited for Wonder Woman on the big screen?