The Wire as a Victorian Novel 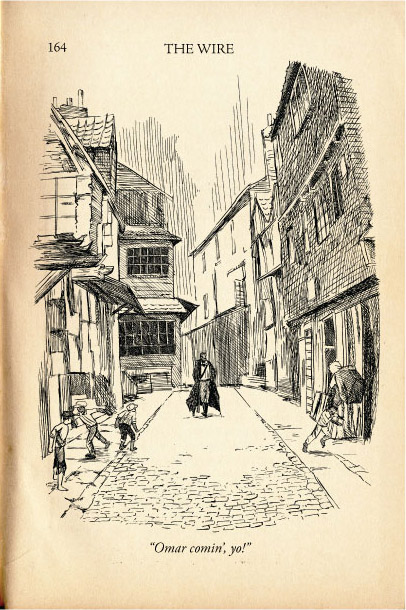 Joy Delyria and Sean Michael Robinson have produced a brilliant satirical essay that re-imagines the acclaimed television series The Wire as a 19th-Century serialized novel. It’s wonderful, and will give you a reason to use the word “Dickensian” today.

There are few works of greater scope or structural genius than the series of fiction pieces by Horatio Bucklesby Ogden, collectively known as The Wire; yet for the most part, this Victorian masterpiece has been forgotten and ignored by scholars and popular culture alike. Like his contemporary Charles Dickens, Ogden has, due to the rough and at times lurid nature of his material, been dismissed as a hack, despite significant endorsements of literary critics of the nineteenth century. Unlike the corpus of Dickens, The Wire failed to reach the critical mass of readers necessary to sustain interest over time, and thus runs the risk of falling into the obscurity of academia. We come to you today to right that gross literary injustice.

You can read the whole essay, “When It’s Not Your Turn,” over at the Hooded Utilitarian.