When It Comes to Sexual Predators, Who Do You Ignore & Why? | The Mary Sue

Hollywood Is Full of Creeps We’d Like to Boycott. Where Do You Draw Your Own Lines & Why? 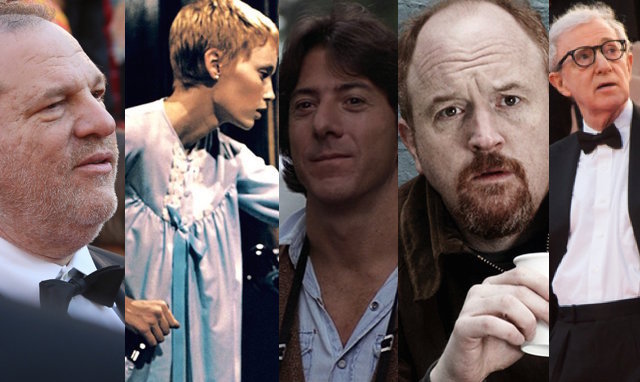 [NB: The article below now includes links throughout to stories detailing the various allegations. -VK]

When it comes to which known Hollywood creeps’ works I’m not willing to consume, I have some pretty hard lines. I don’t watch Woody Allen movies. Johnny Depp is out. I didn’t make a conscious decision to stop watching Louie, one of my former favorite shows; I just stopped being interested in keeping up with it and never looked back. And for me, that’s how most of these lines end up drawn. They’re less active decisions to boycott someone as much as they are an ickiness I feel when watching their work.

But I’ve often found myself thinking about how I make these decisions, and the holes of hypocrisy left around them. With so many women and men refusing to keep the shameful secrets of Hollywood’s creep-patriarchy any longer, I’ve been thinking about it even more than usual.

When I hear people say they are able to separate an artist from their work, I usually take that to mean they simply don’t care enough about a celebrity’s history of assault/harassment/what have you to stop watching the shows and movies (or comics or music or news or anything really because terrible behavior knows no professional limits) they enjoy. Mostly, I just don’t understand how they are still able to genuinely enjoy those things anymore. I know that there are still people who can laugh at Bill Cosby’s comedy, or watch a Woody Allen movie without cringing, but I do not understand how.

Yet I have to admit that those choices are personal and in many ways arbitrary, as well as hypocritical. This is no more clear in the fact that last night, Halloween, I watched the Polanski classic Rosemary’s Baby with some friends, and the hypocrisy of that choice didn’t even occur to me until this morning.

So where exactly are my own lines? Can I justify watching an old Polanski movie if I’ll never see a new one? I already had no interest in watching a Brett Ratner-directed movie (even less so now), but why does the occasional Ratner-produced movie not feel so treacherous? Why did I give up on Casey Affleck long ago, but was able to put Joaquin Phoenix out of mind, even though many of the stories about Affleck’s abuse also involve Phoenix? I won’t see a Johnny Depp vehicle, but will I see the Fantastic Beasts sequel? Am I any different than the people I condemn for placing their own “but I wanna watch it” feelings above the tacit complicity of choosing to ignore the behind-the-scenes abuses of power?

And then there’s the big question: Should I give up the idea of ever again spending money on a Weinstein movie? (Schadenfreudic side note: many people apparently decided to do just that, as the company’s first post-scandal movie, Amityville: The Awakening made just $742 at the box office opening weekend.)

If I do make the effort to be aware of every new movie’s backers and distributors, shouldn’t it go further than that? Shouldn’t I refuse to watch any movie Weinstein has ever produced? It’s not just about a financial boycott, after all. If I do actually force myself to think about what Weinstein was doing while working on those older films, that icky complicit feeling is there. And while people like Harvey Weinstein and Amazon’s Roy Price and any number of other sexual predators may be exiled from their studios, there are plenty of people still left who allowed them to abuse their power, people who didn’t take a stand until it became terrible publicity. How can I feel okay in supporting them?

Where do all of these questions lead? It might sound like I’m gearing up for a mass shaming, ready to tell you that if you don’t boycott everything, you’re a terrible person. I’m not. Maybe I’m saying that you can’t possibly boycott everything, so let’s all give ourselves permission not to care, especially if there’s a movie or show we really want to see? No, I’m also not doing that. If we need to give up 90% of television and movies and music and art and comics and literature and everything else so that we can create industries that don’t facilitate abuse–good, great, let’s burn the existing systems to the ground and start anew!

These are all questions that have been swimming around in my brain for a long time. And when I think about them, yes, I recognize some degree of hypocrisy in my own choices. I don’t know what the answers are, but I believe the questions are probably more important than answers anyway. Because if we need to come up with the answers, especially when the only two available are to care about everything and to care about nothing, it’s very likely that total inaction will be the prevailing result. Isn’t that why it’s so easy to ignore rumors and open secrets? Why men can be known as creeps and abusers, but we as audiences as well as producers, colleagues, HR departments and all the rest find it far easier to just … not think about it? They couldn’t ask these questions because they were too hard, so they did nothing and allowed the abuse to continue.

Again, I don’t have answers, not even to my own questions. I have all sorts of reasons that come up when I choose to examine which artists I unequivocally avoid vs. those I have less hard and fast rules regarding. Louis C.K. is hard to watch because it’s his face and his ideas and his personhood represented in his show. But I still watch and love Better Things, which he produces. Similarly, I should have stopped watching Dustin Hoffman’s movies the first time I head he was an abusive creep. He’s certainly not a draw for me in new movies, but shouldn’t I feel worse watching his movies from the 70s and 80s, when his behind-the-scenes behavior was more openly reprehensible?

Where do we draw our own lines? I sure as hell don’t know. But I do know it’s become commonplace to resist asking the questions until we already have an answer for them, which just allows the problem to fester.  I’m admitting that my decisions are problematic and hypocritical. Yours might be, too. But that shouldn’t stop us from acknowledging our own degrees of complicity in the epidemic of power abuse and sexual predation in entertainment or any industry. We’re not villains for not knowing where the lines are, but we’re a lot worse if we use that as an excuse to push these issues out of our minds.