Can We Please Stop Giving Terrible Men Like Amazon’s Roy Price the Power to Control What Shows Women Can Watch? 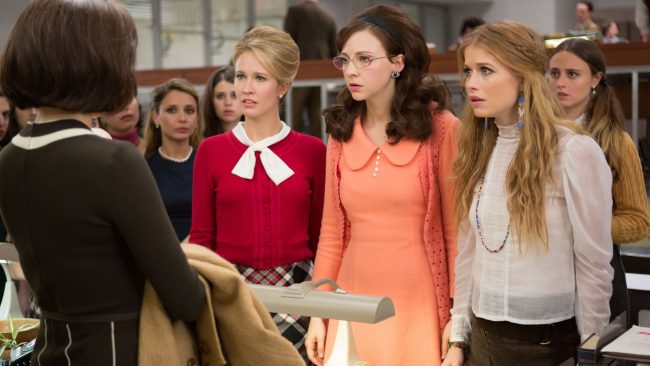 Amazon announced last December that it would not be renewing its original series Good Girls Revolt. The show was based on the true story of female Newsweek employees (as documented in Lynn Povich’s fantastic and infuriating memoir of the same name) who sued the magazine for refusing to allow women to serve as reporters, instead limiting them to the role of “researchers,” a sort of glorified secretary and copy editor for male journalists, even when their actual workload far surpassed the title’s implications.

The cancellation came right on the heels of the presidential election. The mobilization of women at that moment in time might have felt like it lent itself to a built-in audience, or at least a relevant marketing push. But numerous sources said that the main reason for the cancellation was the personal taste of Roy Price, the then-head of Amazon Video, who just didn’t care for the show. He allegedly demanded people refer to characters by the actors’ names in meetings because he couldn’t be bothered to learn the names of the characters. He didn’t like the show, and he didn’t watch it (but I guess still knew he didn’t like it?), and therefore cut it out of their programming, despite the overwhelming critical praise and high viewer ratings.

It was already upsetting to be reminded that a man could decide he didn’t want to watch a story about women struggling to find agency and self-empowerment in their professional and personal lives, and thereby deny the rest of us of that story. Even worse, there were reportedly no women at all involved in the cancellation decision.

As angry as so many of us were over the show’s cancellation, this has all moved into a new light after Price resigned last week following accusations of sexual harassment and assault.

Like Harvey Weinstein and so many other powerful men in Hollywood, Price was in a position not just to assault the women in this industry, but also to dictate what the rest of us see on our televisions and computers. Amazon has had deals with Woody Allen and Weinstein, yet reportedly passed on The Handmaid’s Tale and Big Little Lies. Men like Price who view women as subservient sexual props should not be in a position that allows them to decide how we’re portrayed in the media, and what representations audiences have access to. As a businessman, how little respect does a man have to have for women to ignore the profits and prestige women-led shows are raking in?

The cast of Good Girls Revolt says that the way in which the show was canceled feels “horribly meta.” Erin Darke, who played Cindy Reston, said recently that this is “such a horrific reminder of how far we haven’t come when one guy who seems didn’t even watch it just had the power himself to say no, no one gets to watch it.”

After the cancellation, the hashtag #SaveGoodGirlsRevolt was trending on the hope that Amazon might change its mind or another network could pick up the show. That didn’t happen then, but this seems like a prime opportunity to bring this wonderful, important show back to its many fans. (And from a cynical business standpoint, it could buy the company some much-needed goodwill.)

Given how things have panned out, Amazon should be obligated to greenlight #GoodGirlsRevolt Season 2, right? pic.twitter.com/2ggRnbXLru

Genevieve Angelson, who played Patti Robinson, has some encouraging words.

Roy Price replacement would have to want it a lot. Petition that person. Then, tricky biz of getting the fam back together; people have jobs

I very much want to see this show back on the air, but whether or not that happens, Amazon will be doing a disservice to its viewers and all media consumers if it doesn’t take this opportunity to reevaluate its shortcomings and the damage they’ve caused. They clearly need more women and other marginalized voices in decision-making positions, and structural changes to guarantee executives’ bigotry and disdain for women don’t influence the stories the company deems worth telling.

If that happens to lead to the renewal of Good Girls Revolt, well, that’s just some fantastic icing.

But I hear every single one of your revolts, I have for the past year, my band of ferocious angels. im here for us no matter the show #metoo