We Take a Firsthand Look at the Urinal Gaming System [Video] 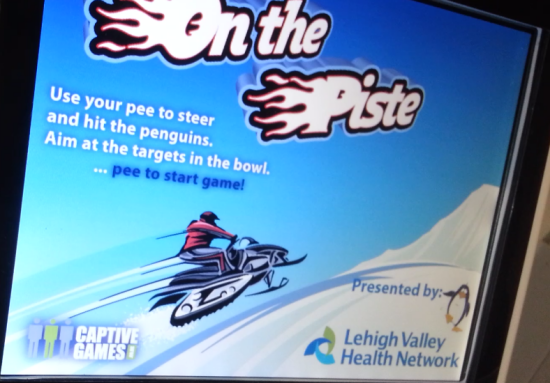 Last week I told you about the first “Urinal Gaming Systems” being installed in the United States at the home of the Lehigh Valley IronPigs — Coca-Cola Park. It’s a video game you control with your pee. It sounded a little too good to be true, but thankfully the team was kind enough to let me stop by the stadium yesterday to try it out, and that’s exactly what I did.

I luckily don’t live too far from Coca-Cola park, so yesterday I took a drive out to the stadium to give the Urinal Gaming System a firsthand run. For the sake of modesty in this video I’m using a bottle of hot water to test the game, but I did actually “use” the game and it’s exactly as much fun as I thought it would be. Though I didn’t score quite as highly as I would have liked to. See for yourself:

Playing that game on your computer or traditional console would be a huge bore, because it’s not the game itself that’s particularly fun. It’s all in the novelty of controlling a video game with you pee. It’s a little like how Wii Sports wasn’t a particularly great game compared to other sports titles, but the novelty of having to move to play it made it great.

If you want to try the Captive Media Urinal Gaming System yourself, the IronPigs have a home exhibition game tonight and their big home opener in Thursday. You can check their website for a full schedule, and remember — they’ll be rotating the games each time the team returns home, so visit early and often to try them all out.

Like I said in the video though, this is a lot of fun and is likely to catch on in other venues, so if you don’t want to make a trip to Allentown, Pennsylvania you can probably just wait until there’s one closer to you. I, however, will be returning to Coca-Cola Park soon to beat my high score, and then I guess watch a baseball game. Go, IronPigs, go.

And no, their mascot is not a pig in Iron Man armor. I know. I was disappointed too.