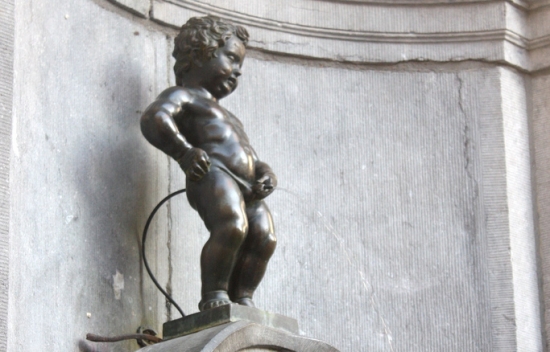 You might not be familiar with the minor league baseball team the Lehigh Valley Iron Pigs, or their home field Coca-Cola Park in Allentown, Pennsylvania, but you’re probably going to want to take a trip there this summer. They’re the first sports venue in the world to offer an interactive “Urinal Gaming System,” which is a video game you control with your pee. This is also the first time I’ve looked forward to baseball season.

The teams general manager Kurt Landis says he expects the games to “make a huge splash,” and also used the term “X-stream games,” but I’m willing to forgive the puns because of how excited I am to go pee into a video game.

Captive Media is the company behind the Urinal Gaming System. They’re based in the U.K., where the system is gaining popularity in pubs and other venues, but the Iron Pigs are the first sports team in the world to adopt the games.

The system works by recognizing when a man sidles up to the urinal to begin a game, and the action is controlled by aiming the stream of urine. This promotional video shows what appears to be a downhill skiing or snowboarding game in action:

To tap into the competitive nature of gamers, players can check their score against an online leaderboard. There will even be high scores on display around the park. This really does sound like a lot of fun, but the park has introduced the games for a good cause. They hope to raise awareness for men’s prostate health.

“Baseball fans know all about RBI, ERA, and OBP, but when it comes to their own PSA, many men don’t have a clue. We see this game as a fun and unique opportunity to remind men about the importance of prostate health.”

If you’re wondering what the “PSA” he’s talking about is, then it kind of proves his point that not a lot of men know what theirs is. It stands for “prostate-specific antigen.”

The specific games being offered on the system will rotate throughout the season to keep the experience fresh and interesting for players, and if there’s not one where you’re a firefighter trying to put out a burning building then I’m going to be supremely disappointed with everyone involved.

Coca-Cola Park is just a short drive away from my home, so the first chance I get I’ll give you all a firsthand report of what it’s like using one of these games. Until then, I’ll be downing iced tea to get myself into fighting shape.