Fact: The Soft-Shelled Turtle Pees Through Its Mouth 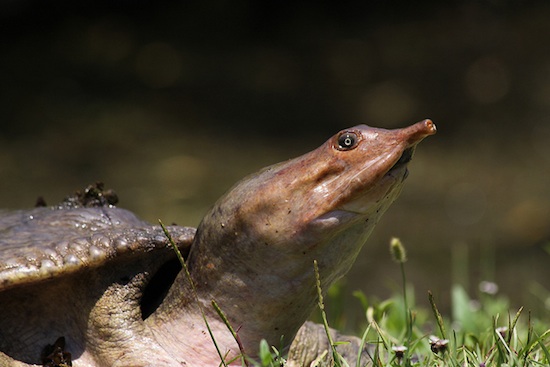 While soft-shelled turtles breathe air, they spend the vast majority of their lives in the water. Even when the pools and lakes they call home dry up, they will stick their heads beneath the surface of a puddle, sometimes for hours on end, a habit that has baffled scientists for years. Thanks to a report released today in the Journal of Experimental Biology, researchers are no longer stumped. They are, however, kind of grossed out, as the study shows that when they dunk their heads, it’s because they’re urinating into the water through their mouths. So how about a little privacy, guys? Jeez!

To find out exactly where turtle urine comes from, researchers purchased Chinese soft-shelled turtles from a local market, thus saving the reptiles from their more common destiny as a soup. Nothing comes for free, though, and in return for the timely rescue, the turtles were obliged to turn over the secret of how they pee, not unlike a gnarlier version of the wish granting fish of folklore. The turtles were taken out of the water where they’re most comfortable and provided with nothing but a small puddle. While the puddle was too minute for them to dive into, it did provide a place for them to dunk their heads, which they did for as long as 100 minutes at a time, during which they were not only excreting urea, but also rinsing their mouths, because thank god for that.

When the team measured the urea levels in the puddle after the turtle’s head dunk, they found the water was overflowing with turtle pee. These observations were followed up by genetic tests that found the turtles express the gene for urea excretion in their mouths, confirming suspicions that the turtles are, in fact, totally gross.

While soft-shelled turtles do pass some urea through their kidneys like you and me, it’s very little, reaching about 6% of the total urine the animals produce. The rest of it leaves through their mouths. This novel method of taking a leak isn’t quite a unique take on the phrase “hitting the head.” Several varieties of fish are known to excrete urea through their mouths in a similar fashion, but this is the first time the behavior has been observed in a reptile.

It’s not yet understood why the turtles would develop this adaptation, but the research team suspects that the trait helps turtles to thrive in the brackish, undrinkable water they tend to call home. Fresh water is a hot commodity in these areas, and excreting urea through the mouth means the turtles can just rinse their mouths rather than drinking, cutting down on the amount of water they have to consume.

If you’re interested in learning more about this little turtle and its bathroom habits — and really, it didn’t even occur to us that you wouldn’t be — you can read the abstract here.