Man Invites Virtual Girlfriend to Wedding, Which Goes Over Poorly With Real-Life Bride 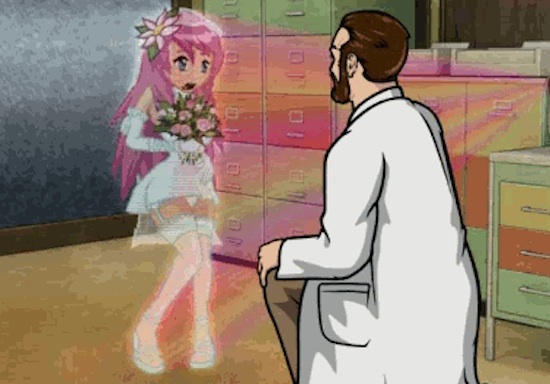 When a Japanese couple decided to tie the knot recently, they wanted everyone who was important in their life to be on hand to share in their joyous day. One catch — for the groom, those important people included NeNe Anegasaki, his virtual girlfriend in the Nintendo DS dating sim Love Plus. The perfectly charming piece of software even had a place set for her at the wedding, so that everyone on hand could meet her. If that seems like an idea that can pretty much only end badly, congratulations, because you are a person with common sense.

Dudes — real talk for just a moment, if we could. There’s a list of people that you just don’t invite to your wedding, under any circumstances, ever. EVER. Way back when we had some small measure of dignity as a species, that list was largely limited to reasonable mistakes a person could make, consisting of “ex-girlfriends” and “guys you roomed with in college who went by names like Tank or J-Dog.” Now, that list apparently includes “the virtual girlfriend who lives in your DS.” Seriously, humanity? Do we even have to have this conversation? I am disappoint.

Apparently, I am not the only one — the bride apparently didn’t find the situation exactly tenable either, and before the evening was out, the night had dissolved into predictable, if one-sided, violence. Once the wedding ceremony was concluded, the blushing bride determined that NeNe was one of the things the groom was going to have to give up with his bachelor lifestyle, going the way of the cool movie posters in his bedroom. Which we feel would be kind of unreasonable, if the groom wasn’t doing things like “inviting his virtual girlfriend to his real wedding.” At that point, man, you’ve got a problem.

Given the circumstances, what happened next may even end up going down as healthy — bride and groom used a wooden mallet to mangle the DS in which NeNe made her home, ending the virtual relationship in perhaps the most traumatic way available. The groom reportedly had tears in his eyes during the process, and while we’re trying to have sympathy for the poor dumb bastard…nope. Nope, it’s just not coming.

If you set a place for your DS girlfriend at your real wedding and the DS is the one that gets broken to pieces with a hammer at the end of the evening, you got off real, real easy. So easy, in fact, that you should probably do something nice for your new wife, who has proven that she is understanding of your nerdy ways, brooks no nonsense, and is handy with a mallet.

Honestly, it’s kind of a shame she’s married, because that last sentence right there is kind of dream girl material.