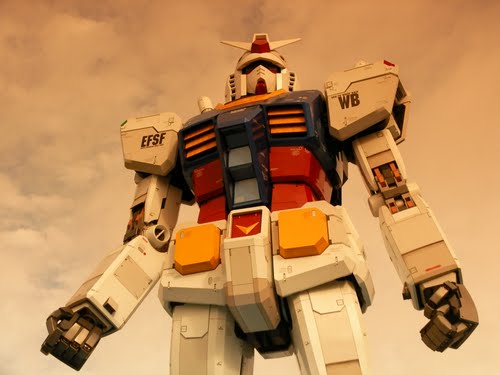 Giant, bipedal war machines are one of those traditional sci-fi staples that we just haven’t seen yet. Where’s my flying car? Where’s my jet pack? Where’s my Gundam? Well if politicians from Japan’s Liberal Democratic Party have anything to say about it, we’ll be catapulting into a sci-fi reality very soon. Two members, Tadamori Oshima and Bunmei Ibuki, are going to discuss the ins and outs of building a full-sized, working Gundam.

In a forthcoming broadcast on Nico Nico Live, a Japanese video platform, the two are scheduled to discuss constructing the massive metal beast — apparently in quite a serious manner — regardless of whether or not it may be economically feasible. Hopefully, if nothing else, they can quickly agree to abandon both the term and the concept of the “Gundam” considering that sophisticated control of arms and hands would be as complicated as it would be useless, and having bipedal tanks walking around holding swords or guns is likewise completely insane.

Instead, opting for a more stripped back Mechwarrior approach seems like it would be a little more sensical. I mean really, what do you really need it to have opposable thumbs for? If you’re going around using a mech to pick things up gingerly, you are doing something seriously wrong. After all, the bipedal monster is probably being considered as some sort of theoretical addition to the nation’s military, and the proper use of a first generation bipdal mech would probably be as a plodding missile boat, not a hulking metal samurai.

Whether this is just an exercise in insanity, or a bid to attract younger, more Gundam-loving people to Japan’s Liberal Democratic Party, is anyone’s guess, but if it actually does go down as planned, it’s bound to be interesting. Despite the fact that none of this is ever going to happen, I’d like to see them settle on something decidedly more Star League than Earth Federation.

(via Kotaku, image via punynari)