Venom’s Honest Trailer Ships Symbrock, Just Like the Rest of Us

In a year where many of us craved some escape from reality, Venom arrived offering just that. This is not a “good” movie in terms of, say, logical plot progression or profound dialogue. It’s often just completely ridiculous. But that’s also an upside of Venom—it doesn’t ask you to think too hard, but it feels well-intentioned. It has some fun so that you can have some fun.

I went in expecting the movie to turn Eddie Brock into an edgelord, but instead we got a sensitive and insecure reporter interested in social justice, the kind of guy who befriends his ex-fiancé’s boyfriend. There was an element of non-toxic masculinity that was as surprising as it was appreciated. There was also a subtextual romance beyond Eddie and Anne’s failed engagement that took the movie-going public by storm. Yes, I speak of Symbrock, the fandom ship that pairs Eddie with the Venom symbiote in a ramping-up of their already codependent relationship.

“Get ready for a gnarly, sick, tight movie, if you’re the kind of person who says gnarly, sick, and tight,” Honest Trailer starts, pointing out that Tom Hardy plays Eddie Brock like “a crackhead squirrel.” It then dwells for a time in a compilation of all of Hardy’s strange noises and exclamations, which are pretty awesome to see in sequence.

“Enjoy a film of charm and action, then stop enjoying as they bore you to death with science talk,” the trailer goes on. “Directing the boredom is the not-so-secretly evil Carlton Drake, a man who wants to destroy humanity in order to save it. A plan shared by this film’s villain, Infinity War’s, Mission Impossible: Fallout’s, and The Predator’s, and that’s just in 2018! Thrill as Drake assumes his final form: Raisin Venom.” As my frustration with underbaked villains is well-documented, I would plead with Hollywood studios and screenwriters to take this to heart and come up with some varied motivation for our bad folks in the new year.

Then we get to the crux of the matter: “But Venom’s not just an action movie. It’s also a love story, as Eddie is torn between his love of Michelle Williams’ terrible wig and the special guy inside of him, who’s ready to make the leap from ‘I’ to ‘we.'” Hoping that the Honest Trailer might at least mention the popular ship of Symbrock, I laughed out loud when they doubled down: “No, it’s not weird that I ship Symbrock. The movie made a quarter billion in China and this is how they advertised it.” 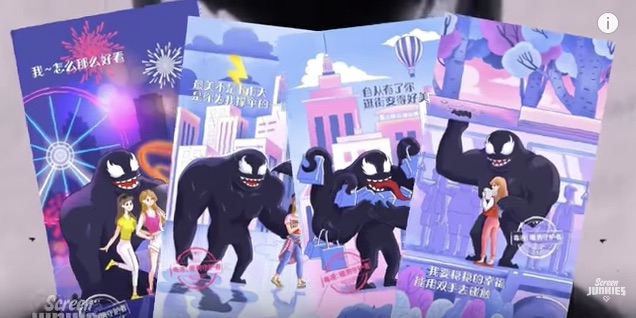 “Ever since Tumblr changed, this is all I have,” Honest Trailer’s put-upon narrator goes on, referring to Tumblr’s ban of all adult content. “Let me have this one.”

Then Honest Trailers zeroes in on what I believe is the precise reason for Venom‘s astonishing box office success (beyond the allure of Symbrock): “So enjoy a comic book film that isn’t bogged down by 20 other episodes like the MCU, or the grandiose pretensions of the DC Universe, ’cause sometimes it’s fun to watch a movie that’s just a movie.”

Ah, truer words were never spoken. Venom is preposterous silly fun that doesn’t ask much from you, and lets you turn off your brain for the amount of time it takes to watch a man and his symbiote fall deeply in love.

This holiday season, he’ll steal your heart and drive you wild. Make a date with #Venom today, then bring him home to meet the rest of the family on Digital 12/11 & Blu-ray 12/18 and experience over an hour of special features. https://t.co/phBGN3t82Q pic.twitter.com/gVb6xxFHbH

(Never forget that even Sony marketing has leaned hard into Symbrock, perhaps one of the only bright spots of 2018.)