Tumblr Has Banned All Adult Content, RIP the Tumblr That Was 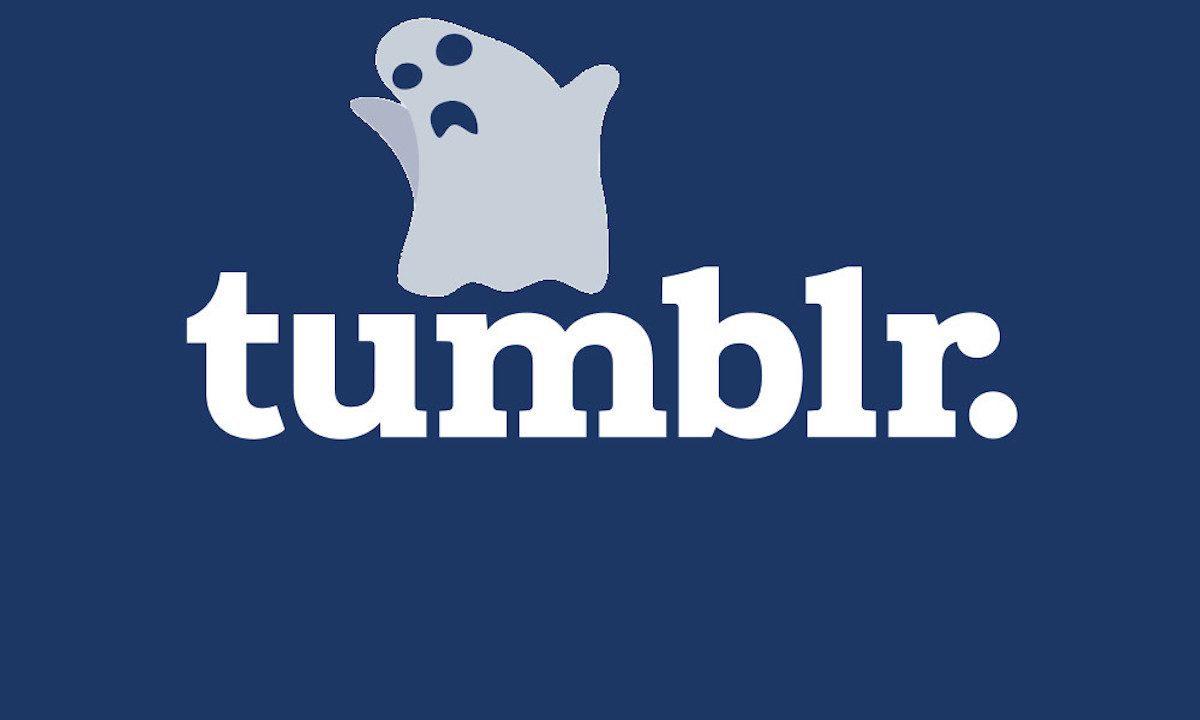 Today is the day the Tumblr community has been dreading: the social blogging site followed through with its policy shift to rid the site of all “NSFW” content, despite considerable pushback from its users and widely negative press coverage.

After an ill-conceived blog post from Tumblr CEO Jeff D’Onofrio that really needed help from a crisis communications expert, wherein D’Onofrio asserted that the ban on adult content would create “a better, more positive Tumblr” and brought the phrase “female-presenting nipples” into the popular vernacular, Tumblr’s users have endured two weeks of dread and outrage. 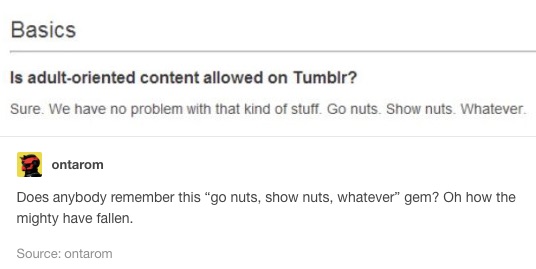 Beyond the loss of access to content—including gender identity photos and discussion, countless works of fanart, and other creations that had long been permitted, even encouraged, to flourish on the network—many of us took issue with the disproportionate harm the policy would inflict on sex workers and marginalized communities.

Some sex workers on Tumblr say the site’s new ban on adult content is dangerous, as they’ll be pushed to seek clients in person vs. online. They say Tumblr’s ban deprives them of their livelihoods. pic.twitter.com/RvSRbnVkqv

No one is falling for the spin of a “more positive Tumblr” when you remove “female-presenting nipples” and hand-drawn sexual depictions but leave Nazi and white supremacist content there for all to see. Search for “nipples” and the site now returns no content, but search for “white supremacy” and you have results galore.

Tumblr is likely bowing to the dual pressures of not being able to control their child pornography problems and the Apple Store’s Puritan standards for wanting things to be squeaky-clean (except for Nazis).

Since the announcement, frustration with Tumblr has been given an outlet in memes about the ban. This kind of tongue-in-cheek creativity showcases Tumblr users’ unique sense of humor and shows why many of us found it an appealing place to hang out. 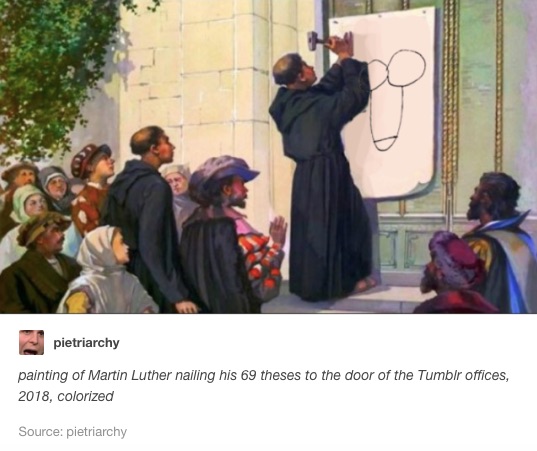 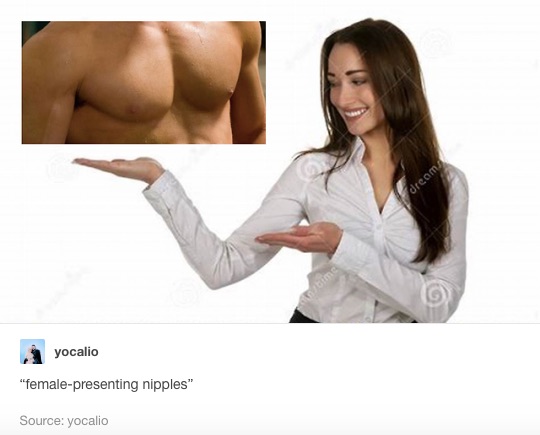 Tumblr has been fraught for weeks with misflagged posts, with everything from pictures of loaves of bread to the staff ban announcement post itself marked as inappropriate by the site’s unwieldy automated content-chopping bots. It’s almost funny when it isn’t so alarming. 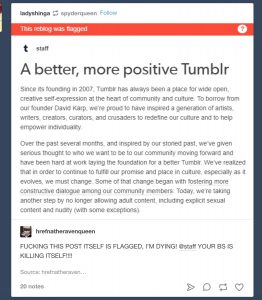 With “tens of billions” of media assets to sift through, Tumblr today asked for patience and said their bots would get better with feedback. The newest staff post that went up—notably not from D’Onofrio—strikes a somewhat more conciliatory tone, acknowledging that they could have done better in communicating their intentions and trying to assert that Tumblr would still be a safe space for its considerable LGBTQ community to explore their sexuality.

Just, you know, so long as there’re no actual sex acts or nipples involved.

If you’re not a Tumblr user, you might be puzzled as to why so many are so furious and in active mourning about the loss of this kind of material. As D’Onofrio has suggested, there are other places where adult content can be found. Yet the sheer variety of posts on Tumblr, and an inclusive sex-positivity that infused the site as a whole, cannot be replicated.

“It’s not that this content can’t be found elsewhere; it’s just that you probably won’t find it sandwiched between a “Queer Eye” meme and a character analysis of “Wonder Woman” anywhere else on the Web,” J.P. Brammer wrote for the Washington Post.

To summarize: Tumblr’s content has played an important role in people’s self-discovery and the forging of communities that can serve as veritable lifelines; sex workers are being denied the livelihoods they had been earning on a safe platform where they could control their own presentation; flagged artists are leaving in droves, also in danger of losing important streams of income, with their absence affecting fandoms overall. Everything appears to be coming apart at the seams.

Other users are also leaving Tumblr behind in solidarity with what they view as censorship and harmful suppression of art, employment, and representation. A “Log Off Protest” is in effect today, wherein users are not logging into the site for 24 hours.

As Brammer explained in a moving Washington Post piece about how his sense of self was shaped on the network, and the larger issues at play:

[Having a Tumblr] meant you were probably queer; the platform is a hub for LGBTQ discourse. But being on Tumblr also meant you had an offbeat sense of humor, an interest in social justice and, of course, a fondness for utter filth. […]

It’s a setback not only to the many sex workers, kink fans and artists who populate the site but also to the Tumblr ethos itself, which drew in so many queer people and made us feel at home, especially those of us in remote parts of the country without an immediate community to connect to. Explicit content played a crucial part in creating that space, so it’s unsurprising the ban has been widely received as Tumblr’s death knell.

The Washington Post has been doing killer coverage on this issue, pouring scalding tea all over Tumblr’s policy shift:

Before Tumblr announced plan to ban adult content, it was a safe space for exploring identity

It’s unclear what the long-term outlook on Tumblr is going to be after the ban, but I’ve seen enough content creators who have left after their blogs were flagged, and friends and mutuals who left in lockstep, to feel profound sadness when I consider the Tumblr that was. A real sense of belonging, safety, and shared creativity in the areas where I lurked is lost. It’s the end of an era.

What was Tumblr to me? The site helped give me a platform and an audience as a writer; it gave me some of my best friends; it was a space where you felt understood, or at least never alone. But my personal feelings are inconsequential compared to the people who are watching their livelihoods vanish and those whose vitally supportive communities are rooted in Tumblr and now uprooted. Because of what is being cast aside and fed to dysfunctional bots, this should be considered an Internet tragedy.

I don’t see Tumblr vanishing into the ether entirely (yet), but the most free-wheeling, open-ended social network out there is no more.

Everyone pour one the f out for tumblr today. The website what gave me an audience and led to my career! The website that caused my anxiety disorder! RIP in peace, you beautiful monstrosity