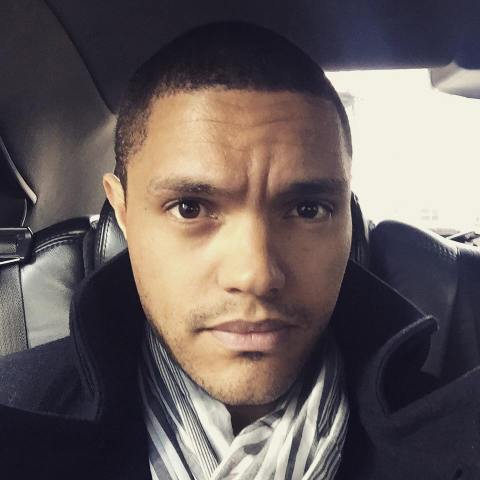 Welp, that was fast: following the announcement yesterday that Trevor Noah would be taking over The Daily Show for Jon Stewart, the South-African comedian quickly became the subject of controversy for his history of tweeting terribly offensive (not to mention un-funny) jokes.

Here’s a sampling, if you want to be really bummed out:

This is disgusting why are people leaking nudes again? And where exactly is the link?

Although those two were more recent, some of the tweets being scrutinized date back as far as 2012 (screenshots via The Independent):

Buzzfeed’s Cates Holderness also called out some of Noah’s sexist tweets after seeing co-worker Tom Gara pulling old ones from as far back as 2010:

I like women that don’t wear make up. For me they’re like pizza- still great the next morning!

Holderness also found instances of transmisogyny and more from the last few months:

Looking at how successful all the Kardashian women are, I don’t blame Bruce Jenner at all.

I hope I meet this sexy lady in the club tonight. #WinterWoman pic.twitter.com/0mW9eePKBQ

As incredibly exciting (and long overdue) as it is that Comedy Central is filling Jon Stewart’s shoes with a person of color,  the fact that Noah couldn’t even be bothered to delete evidence of his sexism after The Daily Show news broke yesterday makes his hiring seem tone-deaf at best, especially in the wake of the recent fan campaign to appoint Jessica Williams as host.

If Comedy Central wasn’t going to hire a woman or a man who respects women, couldn’t they have at least hired a man who would do us the courtesy of not being such an obvious asshat? Sure, Noah’s politics will inevitably be defended as being “just jokes,” but the issue here isn’t whether or not he intended these statements to be serious, but that his tweets demonstrate a long history of using his position in the public eye to “punch down,” a habit that aside from being generally horrible also seems way out of line with The Daily Show‘s philosophy.

“Looking at how successful all the Kardashian women are, I don’t blame Bruce Jenner at all” is a joke, sure, in that it’s intended to be humorous. So is The Daily Show‘s “Feminized Atmosphere” segment. Both are “just jokes,” but I’d rather the one that doesn’t normalize dangerous transmisogyny be given a hugely influential platform like The Daily Show.

That being said, as Roxane Gay points out, the level of backlash Noah is facing for his abysmal social media skills would undoubtedly be less extreme if he was a white man:

Interesting that white comics make offensive jokes and are celebrated or tolerated but Trevor Noah well that’s not acceptable.

I’m not saying his old tweets are ok but I hope you are crawling through the tweets of a range of comedians. The results will be interesting

[UPDATE] According to The Hollywood Reporter, Comedy Central has issued this statement regarding Noah:

Like many comedians, Trevor Noah pushes boundaries; he is provocative and spares no one, himself included. To judge him or his comedy based on a handful of jokes is unfair. Trevor is a talented comedian with a bright future at Comedy Central.

[UPDATE #2] Noah himself has made a statement, we’ve got that for you here.]