Lisa would not approve. 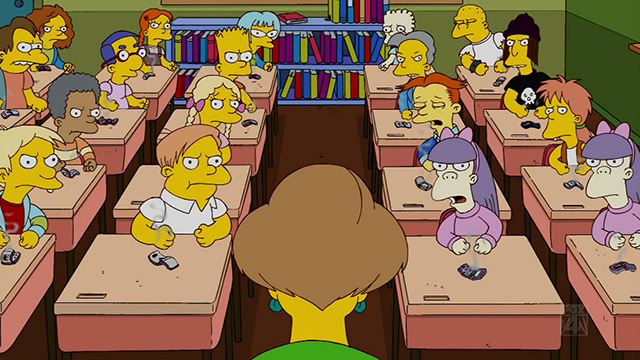 Welp. Looks like Family Guy soils everything it touches by sheer proximity. An hour-long The Simpsons/Family Guy crossover episode is airing this Sunday, and one particular bit in the trailer has a lot of people upset. Because… well, you can see why:

If you don’t want to watch the vid (don’t blame you), it starts with Bart prank calling Moe’s Tavern, like he does, telling Moe he’s looking for a friend named “Li Ki-Bum.” Standard Simpsons fare. Then Stewie from Family Guy gives it a shot with this chestnut:

“Moe, your sister’s being raped.”

Sigh. Yup. Yup, that sounds like Family Guy. The full trailer was released last July at San Diego Comic-Con, and the joke’s just now getting attention because of complaints made by the Parents Television Council, which… doesn’t sound like the sort of organization I’d agree with, normally. But this time I’m on their president Tim Winter’s side. In a press release, he said:

Rape is never a laughing matter. Never. But particularly in light of our nation’s growing concern for high-profile cases of domestic abuse; and particularly at a time when rape on college and university campuses appears to be endemic; it is simply indefensible for a broadcaster to use the publicly-owned airwaves to make tasteless and senseless jokes about rape. Today, we urgently renew our call on the Fox Broadcast Network – as well as the creators of The Simpsons and Family Guy – to remove the rape joke and any others from Sunday’s crossover episode broadcast.

Here here! I’m in the camp of those who believe comedy should punch up, not down. Wanna joke about rape? How about, instead of having your joke be at the at the expense of the victims, who are often blamed and discredited and have to deal with a hell of a lot of bad stuff from society on top of the fact that they were raped, you joke about rapists, very few of whom get even a slap on the wrist. And. Y’know. Are rapists. Wanda Sykes, show ’em how it’s done:

And before anyone wants to come in here whining “but free speeee-eee-eeeeech“—no one’s saying the episode isn’t allowed to make a rape joke, mmkay? Anyone has the right to make a rape joke. Anyone also has the right to say they find said rape joke unacceptable, and if it’s not cut they won’t be watching the episode. If Fox wants to cut the rape joke, they can. If they want to keep the rape joke, they can do that too. Censorship not found.

Winter said he wrote to Simpsons creator Matt Groening and Family Guy‘s Seth MacFarlane (who, let’s be honest, wrote this thing) asking for the joke to be edited out before the episode airs but has yet to hear back from them or Fox. You can see the full trailer here: