The Mary Sue’s Favorite Comments of the Week: Hoverboard Records, Go-Getters, and People Who “Get It” 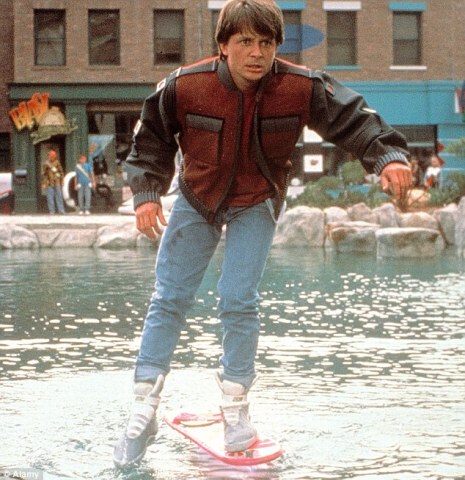 You know what we love most about our TMS commenters? The fact that you’re all such go-getters! We’re honored that our posts inspire you all to pursue such greatness! 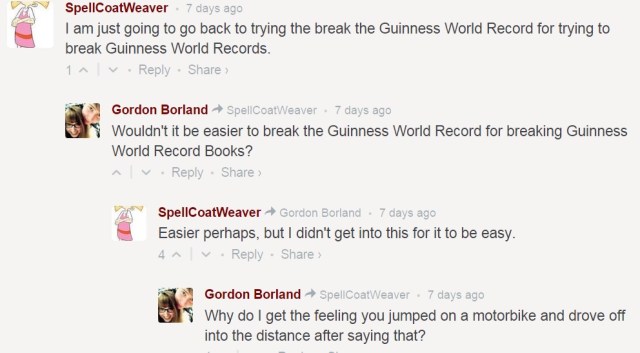 SWAGGER! Meanwhile, others of you saw our post as a reminder to talk about the importance of higher education: 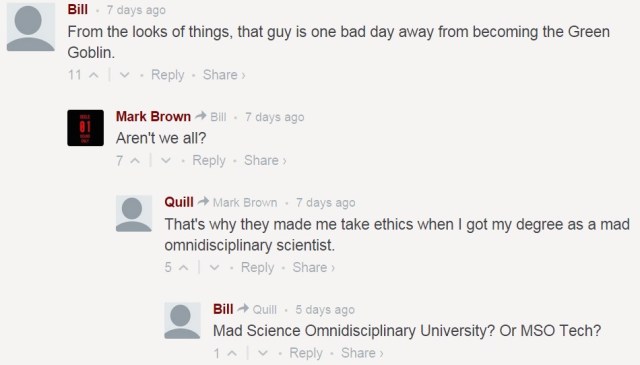 Bravo, villains of the future. Bravo!

Meanwhile, there are those of you who’ve hob-nobbed with fancy science-types, proving that you’ve already arrived. In our recent post about Bill Nye teaming up with Amy Schumer and saying “fuck” a lot, commenter Katherine the Grape said:

I was hoping this would show up here. I loved this segment so much. Back, about 18-19 years ago I met Bill Nye when I was working at Disney’s Pleasure Island. He was drunk and said “Fuck” a lot, too. Still wore a bowtie. Still a very classy dude.

Still, you’re all quite magnanimous about celebrating the greatness in others. In our post about Tatiana Maslany being an LGBTQ+ ally, Macinmosh brought up a really good point:

And many of you even manage to see some greatness in us, and for this, we thank you! Especially Jeff who, on our post about how we’re not promoting Game of Thrones anymore, schooled the “Theon-obsessed trolls” on what we actually write about:

I didn’t want to have to resort to this, but I did. I went through TMS and collected EVERY MENTION of the authors’ displeasure with Theon’s torture arc and sympathy towards the character of Theon.

It outnumbers their writings on their displeasure of the Sansa arc. And keep in mind this is only from the recaps, and just from the writers of the articles. This is to say nothing of the probably hundreds of comments that also express disgust with Theon’s torture arc. Here we go:

“Theon is STILL being tortured for no discernable reason.”

“Theon thinking Ramsay Bolton is his friendly rescuer really creeps me out, which is 100% appropriate to the book. I love it, even as it’s absolutely, completely horrible”

“Barring Joffrey, Gregor Clegane, and maybe one or two others Theon is one of the most hated characters on the show, but if your heart didn’t ache for him in this scene at least a bit then I just don’t know what to say. He tearfully explains that in taking Winterfell he was just trying to make his father proud, but hisreal father, i.e. Ned Stark, died on the steps of King’s Landing. “I made a choice” in betraying Robb, he explains, “and I chose wrong, and now I’ve burned everything down.

His entire life was ruined by this one mistake. Granted, it was a huge mistake. He burned down Winterfell, killed two young boys, and caused the deaths of many others,some of whom he’d known most of his life. It’s not like he left the stove on. But this is Westeros, where everyone is obsessed with power and honor and vengeance and laying siege to castles and staging huge battles—he was just trying to be a part of that, same as Robb is, except he’s not as good as Robb, and he knows that. I’m not excusing the choices he made, which were awful, and I don’t think he would either. But it’s hard not to feel sorry for the guy, especially when it turns out his friendly rescuer was actually taking him back to the people he helped him escape from so he can be tortured some more. Surprise!”

S3EP07 RECAP- “THE BEAR AND THE MAIDEN FAIR”

“Then comes the most painful scene to watch (I think I’m going to be saying that a lot for Theon scenes). Theon is cut down, given water, and sexually propositioned by two women. He’s understandably freaked out. So was I, watching this scene. What is going to happen? What happens, it turns out, is Theon’s torturer showing up just as he’s showing interest in sex, beating him, asking if his “famous cock” is his most precious body part and then castrating him. Gonna be honest, I’m a bit surprised the show went there. This scene was a bit long and meandering, which is kind of a negative in that it doesn’t fit with the rest of the episode at all, but then drawing out the tension really made it all the more terrifying”

And now for Kristy Puchko’s recaps of Season 4:

“We started off at the dismal Dreadfort, where Ramsay Snow, the bastard son of the traitorous Roose Bolton, has been relentlessly torturing Theon GreyjoyReek. I never thought I could feel for Theon after watching him be so gross and vile for so long. It wasn’t the hobbling of his shuffle, the dull look in his eye or the servile crook of his head that got to me. It was that genuine look of shock and pain that ran across his face as he heard Robb Stark is dead. For all his betrayals (which he’s not done dishing out, spilling out that Rickon and Bran are still alive), Theon still loved Robb… not that it mattered in his manipulations.”

“If you’d have asked me back in season two when Theon murdered those little boys if I could ever feel pity for him, I would have laughed derisively. Even through all the Reek torture in season three, I’d been pretty cold-hearted toward Theon. But last night’s episode cracked the ice that his ravaging of Winterfell created. The reveal of Reek in the kennel started it. Then seeing him shrink away from Yara, his would-be rescuer, I felt conflicted. Ramsay runs in sprayed with blood and smiling, and I don’t know who to root for, either for Theon (rescue by Yara) or against him/for his continued existence as Reek. Then things go from bad to much, much worse for Theon.

His sister declares him dead and leaves him to Ramsay. When Theon—swaddled in a map of scars—cowered in the reward bath under Ramsay’s hand, I felt genuine sympathy. It is a shift I found unsettling. But it’s a bewildering strength of the writing—both of the books and series—that Game of Thrones can spur these kind of reversals in our emotions.”

We hope it is.

Thank you all for being so damn impressive and letting us be a part of it! Have a great weekend!