We Will No Longer Be Promoting HBO’s Game of Thrones 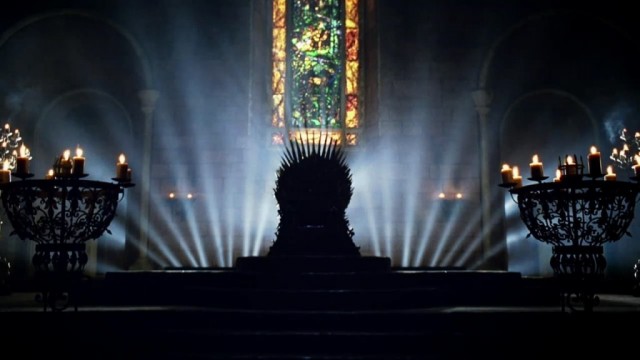 The Mary Sue has decided we will no longer be actively promoting the HBO series Game of Thrones. Allow us to explain.

As I write this, I sit within five feet of no less than ten Game of Thrones promotional products — some of which I’d been sent as a member of the press, but most of which I spent my hard-earned money on. It’s no secret that I’m an enormous fan of George R.R. Martin’s A Song of Ice and Fire book series and, in turn, HBO’s adaptation, Game of Thrones. But I honestly didn’t think we’d find ourselves here again, and the fact that we have fills me with utter disappointment.

Spoilers to follow for the Season 5 episode “Unbowed, Unbent, Unbroken,” as well as the differences between the similar plot threads from the books.]

Just over a year ago, the TMS staff and I felt the need to have a serious discussion after the Season 4 episode “Breaker of Chains.” As you may recall, a scene between two characters which was seen by many as consensual in the books was seen as quite the opposite by many when it was adapted to screen. The consensus from us at that time was that, though we wished the scene hadn’t happened, we were going to continue to watch — but we were not going to let the creators off the hook. Many felt differently, and that scene was the last straw for them. Others had already given up on the show because of its depictions of sexual violence toward women, and saw this as confirmation that they’d made the correct decision.

Showrunners David Benioff and Dan Weiss had discussed further, conscious changes they were going to make to the book storylines for the sake of streamlining the television series. One was the removal of the Lady Stoneheart plot, and another was the serious alteration of Sansa Stark’s journey. To give actor Sophie Turner a larger role and prevent the introduction of yet another character, they merged Sansa’s role with that of Jeyne Poole, a Winterfell resident made to pretend she’s Arya Stark and married off to Ramsay Snow. Book readers hoped against hope it would not mean what we thought it did.

Those hopes crumbled into a million pieces last night, when Sansa was raped by Ramsay as Theon/Reek was forced to watch.

Before we dive into why we felt this was a choice which would cause us to stop promoting the show, allow us to say something very important: rape is not a necessary plot device. Really think about that before shouting “creative freedom” in our direction, please.

Note: FURY ROAD is an R-rated movie w/ a sexual slaver villain yet Miller & co. didn’t feel the need to include a rape scene. #GameOfThrones

The show has creators. They make the choices. They chose to use rape as a plot device. Again.

Let’s talk about what this means for Sansa, now. Many assume Sansa’s current plot is leading her to become “The Queen in the North.” Will she rise to power in that way? That seems like a given at this point, but I don’t care. Why? Because Game of Thrones just took her journey, and put it into the hands of Theon.

In Martin’s books, Theon (like Sansa) is a point-of-view character, meaning we see a chunk of the story from his perspective. The extent of Theon’s torture at the hands of Ramsay is barely covered in the show. When he meets Ramsay’s intended, he knows immediately she’s actually Jeyne. Jeyne even pleads with Theon to help her escape before she can be married off to the monster, but having been broken down so badly by Ramsay, Theon can’t bring himself to disobey. On their wedding night, Theon is forced to actively participate in the sexual assault on Jeyne, who goes on to be horrifically abused by her husband going forward. Theon reluctantly takes part in an escape plan a while after.

Using rape as the impetus for character motivations is one of the most problematic tropes in fiction. Rarely is it ever afforded the careful consideration it deserves. Was there more gravity given to the act on Game of Thrones than in the past on the series? I would say yes; however, it took Sansa from her growing place of power, cut her off at the knees, and put the focus on Theon’s ordeal, instead.

I honestly did have hope Benioff and Weiss wouldn’t go there, especially after the huge and thoughtful discussion by countless journalists and fans surrounding last year’s controversy. But looking at what has taken place this season so far — from Ramsay’s promise to Littlefinger, “I’ll never hurt her. I swear,” to Sansa’s friends at Winterfell, Brienne keeping close watch, and Stannis close to arriving — I assumed Sansa would not go down the same path as Jeyne, especially when you consider Sansa’s own inner strength. As the scene played out, I though she might pull a dagger out of her wedding gown and end Ramsay once and for all.

She didn’t. What a missed opportunity to do something that would have actually surprised your audience. Rape, on the other hand, is expected.

As far as character growth goes, Sansa has been in this exact narrative place before. It was made painfully obvious when Ramsay ripped her dress open like Joffrey did back in the throne room at King’s Landing. Sansa managed to get herself out of one abusive relationship before it went too far, only to find herself in the exact same position. What does this do for her story? Nothing. Sansa is already a survivor. You’ve put her through another trauma for the sake of another character.

After the episode ended, I was gutted. I felt sick to my stomach. And then I was angry. My next thought was, “I’m going to have to spend part of the next six months explaining why this was a bad move over and over.” Not only will there be those who hand-wave the scene simply on the basis of artistic integrity, there will be those who still don’t consider it rape. Which, when you think about the last time we had this conversation, is going to make it all the worse. The cast and creators couldn’t decide if it was rape last time. (They’re still debating it as recently as March of this year.) There are those who won’t call it rape this time. Why? Because she didn’t say no. Because they are husband and wife. Because any of the other hundreds of reasons rape is justified in the real world every single day.

Producer and writer of the episode, Bryan Cogman, spoke to Entertainment Weekly about the scene:

My first question to Cogman was what would he say to fans who ask: “How could you do this to Sansa?”

Cogman seemed to take this question very seriously and took a moment to consider his response. “This is Game of Thrones,” he said soberly. “This isn’t a timid little girl walking into a wedding night with Joffrey. This is a hardened woman making a choice, and she sees this as the way to get back her homeland. Sansa has a wedding night in the sense she never thought she would with one of the monsters of the show. It’s pretty intense and awful and the character will have to deal with it.”

ENTERTAINMENT WEEKLY: What was your reaction when you got the scripts and realized what was going to happen this season?

SOPHIE TURNER: Last season [Thrones director] Alex Graves decided to give me hints. He was saying, “You get a love interest next season.” And I was all, “I actually get a love interest!” So I get the scripts and I was so excited and I was flicking through and then I was like, “Aw, are you kidding me!?” I thought the love interest was going to be like Jaime Lannister or somebody who would take care of me. But then I found out it was Ramsay and I’m back at Winterfell. I love the fact she’s back home reclaiming what’s hers. But at the same time she’s being held prisoner in her own home. When I got the scripts, it was bit like, dude, I felt so bad for her. But I also felt excited because it was so sick, and being reunited with Theon too, and seeing how their relationship plays out. Theon’s a member of the Stark clan but she thinks he totally betrayed and killed her brothers. It’s a messed-up relationship between them.

EW: And then there is the scene described in the production breakdown as “romance dies.” Sansa’s wedding night in episode 6.

Turner: When I read that scene, I kinda loved it. I love the way Ramsay had Theon watching. It was all so messed up. It’s also so daunting for me to do it. I’ve been making [producer Bryan Cogman] feel so bad for writing that scene: “I can’t believe you’re doing this to me!” But I secretly loved it.

Seeing the instant and powerful reaction fans had following the airing of the episode, George R.R. Martin took to a closed-comments posting on his blog. “I have been saying since season one that this is not the place to debate or discuss the TV series. Please respect that,” he wrote in part. “David and Dan and Bryan and HBO are trying to make the best television series that they can. And over here I am trying to write the best novels that I can.”

There’s only so many times you can be disgusted with something you love before you literally can’t bring yourself to look at it anymore. That is where I currently find myself in relation to Game of Thrones. The staff of The Mary Sue feels the same. You may feel differently.

So, from this point forth there will no longer be recaps, photo galleries, trailers, or otherwise promotional items about Game of Thrones on The Mary Sue. The newsworthiness of other items will be discussed by the editorial team on a case by case basis.

We apologize to the cast and crew of the show, as well as countless others invested in the show through their own work, but also to our readers who may feel negatively impacted by this. We’re constantly asking for better from those creating the media we love, for them to really think about what they’re putting out into the world. We simply can’t bring ourselves to be excited by a product which no longer meets our needs as fans.