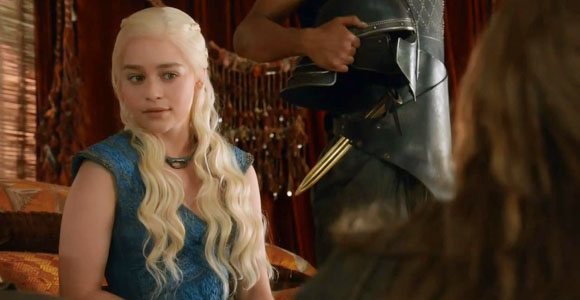 Hey, everyone! It’s Jill filling in for Rebecca for this week’s Game of Thrones recap. So, have we picked up momentum after two so-so episodes?

All I could think at the start of the episode intro was, “Please no Theon torture scenes this week, please no Theon torture scenes this week.” Thankfully, Theon, and us, got a breather from that bit of nastiness. Instead, we opened on Arya and the Hound, brought together by a kidnapping last week. Arya attempts to kill him in his sleep but of course he already knows she’s there. After he goads her on, she contemplates how much she needs her hands and decides against it. They set off on what looks like a very uncomfortable horse ride with even more uncomfortable small talk. The Hound mentions Sansa which perks Arya’s ears but she is quickly distracted when she finds out where they’re headed. Not back to King’s Landing – “Fuck Joffrey, fuck the Queen,” says the Hound – he’s taking her to Riverrun to ransom her to her mother and brother. Finally, a family reunion!

Meanwhile, Daenerys & Co. are spying on the Second Sons, a group of sell swords near Yunkai. She decides to meet with them to see if they’ll join her cause. There’s Mero, who goes by “the Titan’s Bastard,” Prendahl na Ghezn, and Daario Naharis. Mero is incredibly cocky from the get-go. He’s not impressed with Daenerys at all and insists they can’t possibly fight for her considering they already have a contract with the Yunkai. It’s one insult after another, most of a sexual nature, and eventually the three leave with a barrel of wine as a show of her willingness to work with them. We can see the behavior is getting on Dany’s nerves throughout the scene but she keeps her cool until after they leave, telling Selmy to “Kill that one first,” when it comes to battle, meaning Mero.

Melisandre and Gendry arrive at Dragonstone and Stannis remains unconvinced a bastard will do anything to help their cause. He gives Melisandre a critical eye when he believes she means to treat Gendry with extremely good favor, only to ensure him it’s just like slaughtering a lamb, you have to keep them unafraid before the deed. Davos is still down in the dungeons learning to read when his king comes to visit. The two talk some sense about Melisandre and what Davos believes is a needless sacrifice when Stannis admits he’s come to free him. He just has to agree to never raises his hand to Melisandra again. While Stannis doesn’t open up often, he admits he had a vision he is convinced came from the Red God – a great battle in the snow. Well, winter is coming, after all.

We’re back near Yunkai where Daario strokes a sharp-looking knife with a woman’s body for a hilt and Mero and Prendahl discuss what to do with Dany. Mero goes on again about how Dany is basically just a piece of meat to him (while he gropes a prostitute sits on his lap) and  Daario insists he prefers women who actually want to have sex with him, and men who want to kill him. After a bit more discussion they decide Dany is to be assassinated and Daario winds up with the task.

In King’s Landing, it’s time for a wedding. But not Joffrey and Margaery’s, Sansa and Tyrion’s. Tyrion asks her if she drinks wine and suggests this might be the day to drink lots of it. At the Sept of Balor we get a fantastic scene between Margaery and Cersei. They discuss the song, the “Rains of Castamere,” a story about social climbing and people dying at Lannister hands. What seem like subtle threats to Margaery’s goals in life turn into not so subtle ones as Cersei tells her if she ever refers to her as a sister again, she’ll strangle her in her sleep.

Awful King Joffrey shows up with his awful smirking face to walk Sansa down the aisle. Why? Oh, because your dad’s dead, remember?! Longest. Walk. Ever.

Once they’re both to the alter, Joffrey removes a step stool placed there for Tyrion. Part of the wedding ceremony is to cloak the bride as a proverbial protection but without the stool, Tyrion can’t reach Sansa’s shoulders. Laughter starts to spread through the small crowd until Tyrion finally asks her to bend down. They face the man set to marry them and I swear to god I though the Princess Bride priest voice was going to come out of the actor. 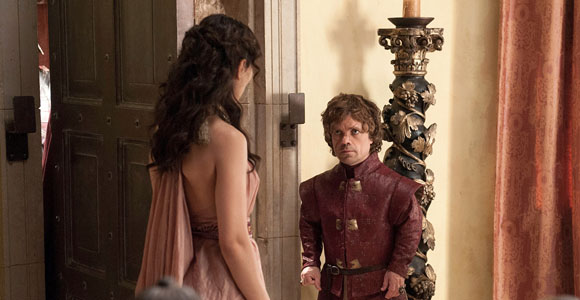 Gendry is getting awkwardly comfortable at Dragonstone. Melisandre plays to just about everything about him. She knows he’s wary so she tastes the wine offered to him to let him know it’s not poisoned (a moot point, we know). She also tries to sympathize with him, saying she also started low in life. And then he practically chugs a glass of wine. If anyone doubted he’s King Robert’s son, now’s your time to put those doubts away. And then Melisandre starts to seduce him. They wind up having intercourse but partway through she ties him up. Ok, he might not have had a lot of experience but he’s not too concerned. Yet. Then come the leeches. And not just randomly placed – she puts one on his junk. Poor guy. As if things weren’t bad enough, Stannis and Davos show up and she removes the leeches. Three of them – one for Robb, Balon Greyjoy, and Joffrey – are placed into the flames and named to the Red God, most likely in the hopes they’ll die. Will the King’s blood do the trick?

The wedding feast at King’s Landing is a big mess. Lady Olenna is making her children uncomfortable by talking about the terribly complicated family tree they now have, Tyrion is getting wasted, and Sansa is trying to disappear into her chair. Tywin attempts to give Tyrion a talking to, which doesn’t go all that well because…drunk. Loras attempts smalltalk with Cersei only to be shut down hard and fast.

And then Joffrey threatens to rape Sansa. Well, more like promises. When he sees Sansa’s reaction to his suggestion of bedding her after Tyrion, he lets her know his guards will hold her down for him. Just when she thought she was out, right? To make matters worse, a drunk-on-power Joffrey announces the bedding ceremony, when the guests are meant to help disrobe the bride and groom and take them to bed. Tyrion, having enough of this farse, threatens Joffrey publicly. Yup, alcohol will make you do stupid things. Back in the happy couple’s wedding chambers Sansa reminds her new husband she’s just 14 and goes straight for some wine when Tyrion reminds her he’s been ordered to consumate their marriage. But as we’ve seen from Tyrion before, he doesn’t want any part of this and stops Sansa from undressing. He says he will only bed her when she wants him to, to which she replies, “What if I never want you to?” Well then, says Tyrion, “And so my watch begins.”

In Daenerys’ camp, Missandei is talking some serious shit about Dany’s Dothraki. The language, not the people. It’s a pretty cute scene cut short by Daario revealing himself. Sitting naked in a bath, with no guards, Dany is pretty vulnerable but Daario insists he’s not there to hurt her. Instead he drops the heads of Mero and Prendahl on the floor in front of her. Ok, that’s a pretty good way to prove your loyalty. Dany asks him to swear an oath to her anyway. “My heart is yours,” says Daario. Interesting…

One more quick stop back at King’s Landing where Shae wakes up a severely hungover Tyrion and untouched Sansa. How does she know she’s untouched? She finds clean bedsheets.

We unexpectedly meet back up with Sam and Gilly who need to stop for the night and just happen to do so by a weirwood tree. And some crows seem to be gathering. How odd. The two seem to be getting along quite well and Sam is certainly better at talking to her now that they’ve spent so much time together. He jokes about the baby winking at him and she asks if he talks fancy to confuse her. There’s more of a ruckus going on outside as tons more crows have landed in the area. “I’ll be back…” says Sam. Oh, Sam. Don’t say, “you’ll be right back,” because you won’t be back. Or at least that’s how it seems. Out in the darkness comes one single White Walker. Actually, it’s that White Walker that seemingly led the attack on the Night’s Watch early in the season, the one that passed Sam by as he sat shivering and scared in the snow. Without any hesitation, Sam raises his sword to the creature. And the creature shatters it with his bare hands.

The While Walker heads toward Gilly and the baby when Sam remembers he has one more weapon on him, the black dagger he picked up on his travels. He sinks it deep into the White Walkers back and…the White Walker shatters.

While there wasn’t a terrible amount of action in this episode, at least all of these scenes furthered the story. At no point did I feel like we were wasting time. And I’m pretty sure Peter Dinklage’s drunken acting might have just earned him another Emmy. Just two more episodes left in the season but guess what? We have to wait two weeks for the next episode, HBO is premiering Behind the Candelabra next Sunday. Dammit, Liberace.

Daario was not a Second Son but a Stormcrow in the books, a group of mercenaries. Mero is not killed by Daario but by a mob of freedmen after an attempt on Dany’s life, and Daario kills Prendahl and Sallor the Bald, a character seemingly deleted from the story here, in order to show his devotion to Dany.

The Tyrion/Sansa wedding played out pretty much exactly like in the books and they captured the absolute mortified experience of both the husband and wife very well.

Arya doesn’t actually have her run-in/kidnapping by the Hound until both of them arrive at Riverrun separately but this doesn’t really change anything.

Gendry is no where near Dragonstone in the books, it’s another of Robert’s bastards, Edric Storm, Melisadre intends to sacrifice. I wonder if Gendry’s role will play out as Edric’s does or if they’ll continue on in another direction with him?