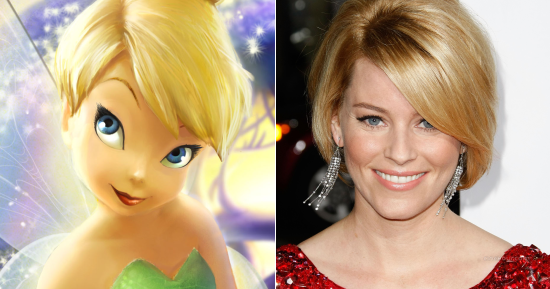 She’ll be starring in The Hunger Games in just a few months but Elizabeth Banks is already gearing up for another role, that of Tinkerbell is Disney’s live-action adaptation. As if we weren’t excited enough about this project, currently being written by Marti Noxon, things just got better. Banks has compared the film Tink to the Jon Favreau/Will Ferrell comedy, Elf. Hear what Banks had to say.

Banks spoke with MovieHole about what to expect from Tink. “It’s a live action Tinkerbell movie sort of in the vein of Elf in which I would play Tinkerbell,” she said. “Tinkerbell gets thrown out of Never Never Land, and it’s about where she goes and who she meets and the adventures she has.”

I don’t know about you, but this concept has me really excited. Banks is a fantastic actress no matter what role she’s in but I feel she really shines doing comedy.

Noxon, who is rewriting the script for Disney, previously spoke about the project which is still in the very early stages. She compared it to Enchanted, a very similar fish-out-of-water scenario., “It’s about her coming to the real world in a non-fairy form. That’s about all I can say about it.”

Though Noxon said part of what attracted her to the project was gender politics. “It’s hard to write or even find a movie for eight- or nine-year-old girls that isn’t about, ya’ know, ‘I need a boyfriend!’ I mean, Tinkerbell has a job! She’s one of the few characters in that fantasy world that actually has a job,” she said, “I have a seven-year-old daughter and I want more movies for her where afterward I don’t have to make something up like, ‘You know, the job of running a kingdom is really hard work, and she and the Prince are going to have to communicate a lot.’”

“Tinkerbell is one of the greatest characters because she’s mischievous and snarky and fun and sexy and jealous and vengeful,” said Banks of the lovable fairy.

You’ll see Banks playing Effie Trinket March 23 when The Hunger Games is released and the actress has a few more films in post-production but as I mentioned, Tink is still in its infancy. Banks added, “We’re in script stage and everybody is really excited and blah, blah, doesn’t mean anything. You might as well not even write it down because who knows, it might not even happen.”