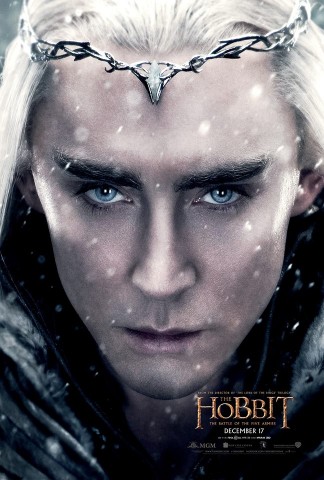 I imagine the conversation at Mirkwood between Thranduil and Legolas went something like this: “See, son? Here’s how it’s done. Neither of us are ever going to match Galadriel’s intensity, of course, but at least I’m making the effort for furrow my magnificent brow at the camera. What did you do in yours? Draw an arrow? You do that every time. Now, go and make sure my elk steed’s luxurious fur gets a good brushing, I have to be at Rivendell tomorrow and I can’t have him looking like an unkempt dwarf or something.”

The Hobbit: The Battle of the Five Armies isn’t the only movie busting out the gloriously blond and chiseled fan favorites, though. Not to be outdone, The Hunger Games’ Twitter account also brings us this lovely character profile of Finnick:

Finally finding his voice against the Capitol. pic.twitter.com/q8R4sbYgD8

Oh God, it is so, so hard not to make an innuendo out of “enhanced trident.” That is what the Capitol wants and I must resist. Finnick has feelings, damn it—wonderful, heartbreaking feeeeeliiiiings.