Unfortunately, this was an episode that couldn't really decide on what it wanted to be. 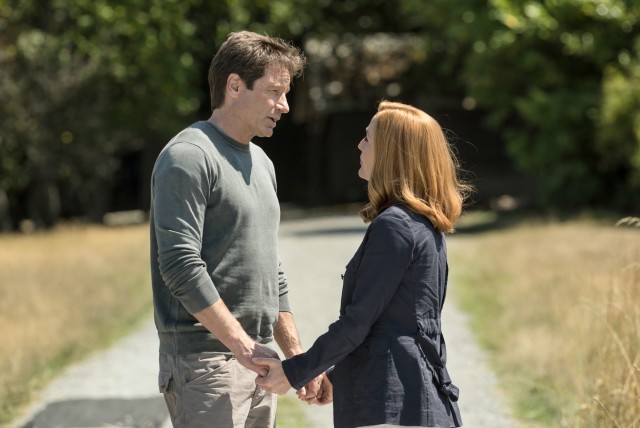 On the whole, I’ve had pretty positive feelings about the return of The X-Files–and the last couple of episodes have been strong enough to validate those feelings. It would be unfair to expect that the revival would be completely perfect–heck, the original series definitely had its share of dud episodes, but the difference is that back then there were more of those episodes. With only six hours to tell the story, the chance of a narrative misstep may not be as readily forgiven by the audience–especially since, as of now, there’s only one more episode to go before The X-Files signs off (though there have been whispers about a potential follow-up season). For the short-term, however, these six eps are all we’ve got.

And that’s what makes “Babylon” so disappointing overall. I’ll admit that my excitement over The X-Files‘ comeback allowed me to gloss over some of what made the first hour of the miniseries so clunky–but Chris Carter is back to write and direct a standalone episode this time, and while it may not have been as heavy-handed as “My Struggle’ in terms of the mytharc–it left myself (along with a lot of other viewers) with very mixed emotions. I haven’t even gotten to the scene where Mulder does mushrooms (although it amusingly satisfied my half-joke of a desire to see David Duchovny act out a scene where Mulder gets high).

There were parts that I enjoyed, don’t get me wrong. I liked the introduction of the next generation’s version of Mulder and Scully. FBI Special Agents Miller (Robbie Amell) and Einstein (Lauren Ambrose) were a nice addition to an otherwise tumultuous and confusing story. Truth be told, I would have been completely fine if all this episode had accomplished was the introduction of their characters to help Mulder and Scully on a more paranormal case–especially since it seems as though they’ll both be returning for the finale. Instead, we got a weird pairing-off of Scully with Miller, the agent with the belief in the supernatural, and Mulder with Einstein, the skeptical medical doctor. A part of me was hoping it was some elaborate joke Mulder and Scully were trying to play on the new agents–but that’s not what we got.

I still don’t… entirely understand what the episode was about? As a narrative, I’m not sure what “Babylon” was trying to be. How does an episode that opens with presenting our bad guys as Muslim terrorists (who also happen to be suicide bombers, because obviously–and I say that with an eyeroll) somehow shift gears into having Mulder do mushrooms to try and talk to one of the suspects? He does this, of course, because the suspect has seemingly been pronounced brain-dead–but Mulder believes he’ll be able to make contact with the young man on a separate plane of existence. Of course things don’t go according to plan, so there’s a long drawn-out scene where Mulder, tripping out on mushrooms, finds himself wandering through Texas and dancing in bars while hallucinating the existence of The Lone Gunmen and also having a brief S&M fantasy about Agent Einstein. What? I mean, what?

“Babylon” had the opportunity for some great commentary. It could have simply been about the FBI trying to prevent a series of terrorist attacks, perhaps without anything spooky going on at all. It could have allowed Mulder and Scully to have a greater conversation about faith and obligation, rather than the last five minutes they were allotted at the tail-end of the episode. It could have taken a more comedic turn by nixing the terrorist plot and merely been about Mulder and Scully having a wacky time down in Texas with a green pair of FBI agents. But it didn’t make sense to introduce the sensitive subject of domestic terrorism in one hand and then pair it with David Duchovny doing a line dance to “Achy Breaky Heart” in the other.

At the very end of things, it’s unclear who really led the charge in stopping the terrorist threat; we get a surprisingly warm scene where Einstein congratulates Miller on his success, but even he seems surprised to be earning the credit for the bust. After last week’s emotional rollercoaster of “Home Again” and the prior week’s amusement of “Were-Monster”, “Babylon” felt like it was trying to juggle too many balls in the air all at once–and didn’t have the ability to keep any of them aloft.

I said this on Twitter, but I honestly think the best parts of this revival for me have been those scenes where Mulder and Scully just talk–just have simple, quiet conversations about life, the universe, the Truth and anything in between–which is why it was a bummer that it took this episode so long to get to that point. It was certainly a conversation that could have began in part much earlier on in the story, only to be fulfilled by that quiet reflection as Mulder and Scully walk together down the gravel driveway leading out from Mulder’s home.

After an episode that couldn’t really decide what it wanted to be, that ending scene was the simplest and best moment. They talk about the God of the Bible versus the God of the Quran, about how language has divided the world and about how love is, at the core of everything else, unspoken. Could Chris Carter be driving home a point about the Mulder/Scully relationship? The incorporation of a Lumineers song in that very scene would lead one to believe so. Did make up for an otherwise messy episode? Not really. But it was peace–for Mulder, for Scully, and for us–even if only for a moment.