Trying to come up with a review that isn't just "crying face emoji" and failing. 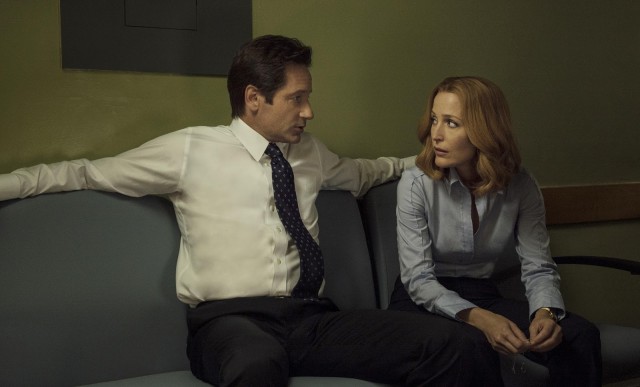 The only downside to having a new X-Files episode every week is that I’m starting to get used to it now. As a relative latecomer to the original series my viewing experience consisted of a solid several-month binge-watch on Netflix, without a week-long breather in between episodes. After last night’s episode, though, I’m grateful for the chance to recover. “Home Again” (which bears no relation to the thoroughly disturbing “Home” of season 4, in spite of its similar naming) felt like it was less about this week’s monster and more about returning to some of what had been left hanging in the air between Mulder and Scully.

That’s not to say that the monster of this week doesn’t hold his own; he’s positively terrifying and disgusting all in the same instant, a creature conjured into being by the combination of a street artist’s vision and festering resentment within a small population of homeless people. Similar to the tulpa in “Arcadia”, this trash-monster is less concerned with any greater purpose–he’s just content to carry out his role as the one offing those people making life difficult for those who are less fortunate. (Is it just me, or have Standards and Practices relaxed their stance on certain displays of violence? I’ve never been a huge fan of gore, so for me there were at least one or two scenes that were somewhat tough to get through–even if the bloodiest parts happened in shadow or just out-of-focus.)

But ultimately, the monster-of-the week takes a backseat to the bigger story–rather unexpectedly, Scully receives a phone call at the beginning of the investigation with the news that her mother has suffered a heart attack and has not regained consciousness. It’s a call no one ever wants to get, and for Scully–who once spent the length of an episode in a coma after her abduction–there’s no ignoring the fact that now the situation is sadly, painfully reversed. What’s even more unfortunate is that, while news of Scully’s mother means the return of actress Sheila Larken (who originated the role of Mrs. Scully), we didn’t get much of an opportunity to enjoy several long mother-daughter scenes. If you’re going to be bringing back original cast members, maybe give them a little more to work with?

There was a brief moment where I was wondering if Mulder and Scully would be kept apart for the bulk of the episode–Mulder’s still dealing with the case while Scully has to come to terms with the reality of her mother’s wishes for end-of-life care–so I was pleasantly surprised when the story not only didn’t break them up for too long, but brought Mulder in to support Scully in a time where she needed him the most. Years ago, it was Mulder and Mrs. Scully waiting for her daughter to come back; now, it’s Scully’s turn to plead helplessly with her mother as she feels her slowly starting to slip away. And in that moment of loss, which happens too quickly for any of Scully’s remaining family to get there in time, she’s able to turn to Mulder for comfort.

This is, unquestionably, Gillian Anderson’s episode. Watching her in “Home Again”, I was angry all over again at the reminder that she had to fight just to be paid as much as David Duchovny was for this miniseries; when it comes to sheer talent and acting ability, there’s no question about how much she truly deserves. While last week’s episode seemed to fall mostly to Duchovny in terms of who did the most heavy lifting and appeared in the most scenes, it allowed Anderson to play Scully as the more straight-faced foil to Mulder’s wacky antics. This week, it was Mulder’s turn to support Scully–and it felt like the actors recognized that.

In our X-Files halftime report, I mentioned wanting to see a little more closure when it comes to the William storyline. It turns out that what I got was plenty of feels about the William storyline–well-timed flashbacks will do that to you–but not so much in the way of closure. I get it, though. With only six episodes to tell the story, these writers definitely have to make the most of what they’ve been given–so similar to what James Wong did in the script for “Founder’s Mutation”, I appreciated the way that Glen Morgan found a way to incorporate Mulder and Scully’s long-standing issues into your typical X-Files monster-of-the-week episode. It was a pleasant surprise, especially since “Home Again” had mostly just been touted as a creepy one to watch–without any real indication of what we could expect beyond that.

My prediction? This episode is going to go down in the record books as the one in the miniseries that packed the biggest emotional punch, although the ending certainly leaves some things up in the air. But maybe that’s the whole point of “Home Again”. The monster isn’t caught, but merely disappears without a trace. And while Scully is left with a myriad of questions in the wake of her mother’s passing, what she does know is that she’ll be sticking with Mulder to the bitter end.

With only two more episodes left, I’m not going anywhere either.