A delightful Darin Morgan episode. (Did you catch all the Easter eggs?) 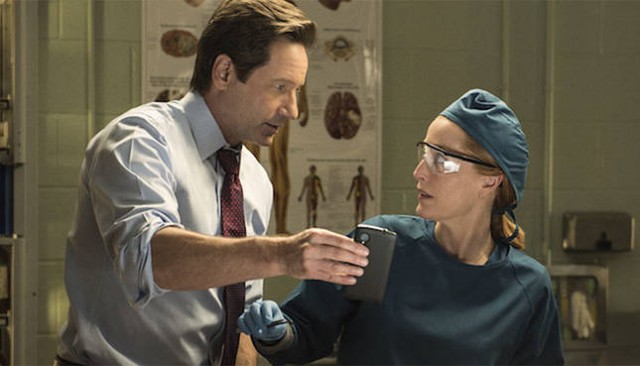 In my review of last week’s episode, one of the things I talked about loving most about The X-Files–at least, in the original series–were those episodes when it didn’t take itself quite so seriously. Monday night’s episode, “Mulder and Scully Meet the Were-Monster”, was a perfect example of when this show does humor and does it well, and that’s in large part due to the mind behind the story.

Diehard Philes will recognize the name Darin Morgan–he wrote several fan-favorite episodes of The X-Files, including “Clyde Bruckman’s Final Repose” and “Jose Chung’s From Outer Space”, but he also had a few cameos as memorable baddies on-screen, like the flukeman in “The Host” and the shapeshifter in “Small Potatoes”. With “Mulder and Scully Meet the Were-Monster,” Morgan not only penned the script but stepped behind the camera as director for the first time on the show, and the result is a light, fun, quirky and surprisingly sexy episode that had both myself and many fans making chinhands at our television screens last night.

Mulder and Scully are definitely back and immersed in the X-Files, but Mulder’s feeling discouraged. Technology and social media have formed a lethal combination to work against him in this instance, debunking many of his wild theories. It was interesting to see him as the “doubter” in the episode, lofting pencils not at the ceiling this time but against Scully’s I Want To Believe poster tacked against the wall. The X-Files have rocketed forward into the modern age while they’ve been gone, and as an unfortunate side result most of their open cases are officially closed. But Scully’s got a case that she thinks might intrigue Mulder–so once again, they’re heading to a small town to investigate the sighting of a horned monster with three eyes (or is it only two eyes?) who’s running around biting people.

And the joke on Mulder continues, at least for most of the episode. He’s not very good at using a smartphone–and it shows. At one point he chases after the were-monster with his phone at the ready, but he can’t seem to get the camera app to work properly and so most of his photographic evidence ends up blurred, way too close or with the screen flipped around so all we get is footage of him screaming. Morgan’s episodes have never failed to poke fun at the character of Fox Mulder, to knock him down a peg or two–but in this instance, it doesn’t feel cruel to make Mulder the butt of that joke. He does figure it out in the end–though without his cell phone. (Pay attention to the scene where he gets a call from Scully. His ringtone sounds very familiar…)

There are a lot of memorable guest stars in this episode–including Kumail Nanjiani and Rhys Darby in two featured spots–and if you have an especially talented eagle eye, you might have noticed the two actors playing stoners in the cold open are the same stoners from episodes “War of the Coprophages” and “Quagmire” (two more episodes Morgan either wrote or assisted on).

The twist in this story–and one of the best parts about the episode–is that the were-monster is undergoing a change, but not the one you might expect. Sure, he might look scary normally–but once he’s the one who gets bitten in the woods, he becomes human and finds himself falling prey to the minutiae of human existence. He’s compelled to get a job, to earn a living, to drink coffee and own a pet–and while he occasionally turns back into his original scaly self, it never lasts long (much to his disappointment). When Mulder inevitably tracks him down to ask him some questions, he’s living under the alias “Guy Mann”, and in a hilarious monologue the were-monster relays everything he’s been up to–turns out, as a human his life is pretty mundane.

So who’s the one running around biting people? We do find out in the end, but like most endings to Darin Morgan-penned episodes, it’s wrapped up neatly and succinctly–and not necessarily the most important part of the story after all. The fun in this episode is the journey our characters take getting to the end, and there are a lot of great jokes and in-references to previous episodes in the series for fans to, well, sink their teeth into. (I counted at least three in one exchange of dialogue, but there are numerous others–and I definitely plan on making a list once I sit down to rewatch the episode again.)

You can tell, without question, that everyone involved had fun making the episode too. Anderson and Duchovny can deftly handle the serious scenes as Mulder and Scully, but one of the bigger aspects of their chemistry is their ability to play off one another comedically. Often, the funniest moment isn’t one of them cracking an obvious joke but simply just standing there reacting to something hilarious going on. (Personally, I’ve always been a fan of Anderson’s Scully deadpan when Mulder is being particularly crazy in his theories–and there’s a scene for that, too.) The only detractor from “Were-Monster”, unfortunately, was the awkward placement of a trans character as a prostitute (a note that almost felt like an afterthought)–and I’m not sure why the show assigned Mulder, a cis male, the role of trying to explain the definition of transgender to the were-lizard man in a later scene. It felt unnecessary and out-of-place in an otherwise fun episode.

Last week, I proclaimed “Founder’s Mutation” to be my favorite episode so far. “Mulder and Scully Meet the Were-Monster” may just have knocked it off the top spot, but honestly the two are pretty close in my book; it’s difficult to weigh a funnier monster-of-the-week episode against a much more dramatic one, especially when they’re both solid from start to finish. “Were-Monster”, however, is one I can see myself putting on in the future when I need a good laugh. It’s our two favorite agents doing what they do best, it’s Darin Morgan at his best, it’s X-Files at its best.