Mulder and Scully are back! (For better or for worse.) 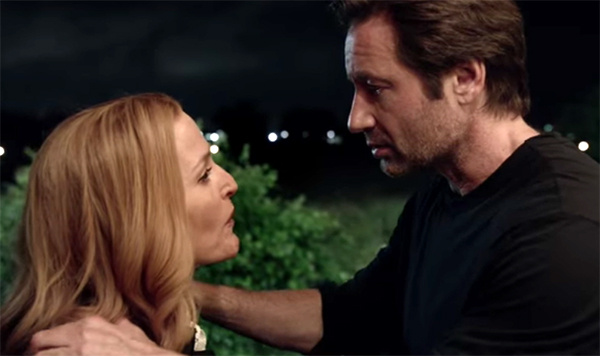 Okay, I’ll admit it–I was excited for the premiere of the first episode of the X-Files miniseries last night. I blame that in large part on social media; in the hours leading up until the ep actually aired the hype was real, with friends and brands and celebrities alike tweeting out their feelings over getting the chance to watch The X-Files live for the first time in almost 14 years. And yet I tried to temper my expectations; while initial reactions to the episode’s premiere at New York Comic-Con were positive among fans, later reviews were much more critical. Still, I was going to have the opportunity to see Mulder and Scully diving back into the X-Files on my TV screen again. There wasn’t a lot a few negative reviews could do to sour my mood, and I wanted to watch the episode for myself.

We get a Fox Mulder voiceover as the intro to “My Struggle”–and while there’s something entirely too soothing about the sound of David Duchovny’s voice supplying us with backstory, it’s difficult to sum up nine seasons of a show in a manner of minutes. As a fan familiar with the original show, it didn’t seem as though the Mulder-explained summary would be too tough for X-Files newbies to pick up on without having seen past episodes, but there’s also not a lot of time spent dwelling in the past before we jump ahead to find out what Mulder and Scully have been up to since we last saw them.

Turns out not much has changed since the plot of the second film, I Want To Believe. Mulder is marginally less scruffy but remains in pursuit of those paranormal cases (although now with the help of a laptop and a fictional version of Google); Scully (Gillian Anderson) continues to put her degree as a medical doctor to good use performing life-changing surgeries at the hospital. And yet it’s Scully the non-believer who reaches out to Mulder, surprisingly, after she’s contacted by FBI Assistant Director Walter Skinner (Mitch Pileggi) with a request for Mulder to look into a right-wing government conspiracy theorist, Tad O’Malley (Joel McHale). (By the way, Skinner has worked at the FBI for how many years now–and yet the guy can’t swing a promotion? Them’s the breaks, apparently.)

Frankly, any scenario that gets Mulder and Scully back together again is okay in my book–Duchovny and Anderson still have that chemistry that made the show so memorable before, and it feels almost exactly the same now. The only difference is the history, all those years where the X-Files have drawn them together and driven them apart. It’s unfortunate, then, that most of the scenes between Mulder and Scully in this episode feel clunky, the dialogue seeming to pluck every single familiar catchphrase and scramble them together like an X-Files Mad Lib game. Any episode related to the mythology of the show and written by creator Chris Carter, as “My Struggle” is, tends to be weighted down this way. Anderson and Duchovny certainly made the best of what they had to work with, and their ability to play off each other so well on-screen made these moments feel a little more bearable.

It’s also odd, given the emphasis the show put on the Mulder/Scully relationship through the sequence of glossy 8x10s, that this episode would try to sway us toward the expectation that Scully may find herself in a romantic entanglement with Tad, the very right-wing broadcaster Mulder was asked to look into in the first place. Carter recently referred to the pair as having a “platonic relationship”, which many fans disagreed with. He seems to be pressing on with that belief in “My Struggle” too; in one scene particularly fraught with heavy dialogue, Scully refers to herself as Mulder’s “friend and physician.”

There’s a lot this episode tries to cover in a limited amount of time, and there are only so many monologues that can bearably get us to the real conspiracy–which is that, after all these years, it may not be aliens at the heart of the capital-T Truth Mulder has been seeking to learn for himself. I’m intrigued to learn more about how this reveal might factor in later, but I also would have liked to see a new kind of conspiracy–maybe one that wasn’t necessarily linked to the Truth that’s already been revealed to varying degrees over the course of the original series.

According to the episode titles, “My Struggle” is only part one of a two-parter, with the second half airing as the last episode (presumably to bookend the miniseries). And that’s probably a good thing. It’s also a good thing that we’re going to have a few standalone, monster-of-the-week episodes to look forward to in between to break up the density of the mythology, with the first of these airing tonight.

The best part of the original X-Files was when it didn’t take itself so seriously, sprinkling in lighter one-offs to give its audience a chance to recover from the more involved mythos. It sounds like the miniseries will be going back to that, at least for as long as the five episodes we have left.

What did you think of the first episode, gang?